(Above) Band captains from 20 bands totaling more than 1800 members assemble at midfield and along the goal lines to await awards announcement at the Covered Bridge Marching Band Festival at Gilbreath Stadium in Oneonta.

In case you haven’t noticed lately, marching bands are a real big deal in Blount County, as elsewhere. Two band events held recently should give you an inkling how big.

Oct. 3 was the annual Night of Bands. This year, all six of the county’s high school bands – more than 400 members – met at Hayden High School for the Seventh annual band night. (By comparison, football teams at all eight high schools in the county number roughly 300 players.) 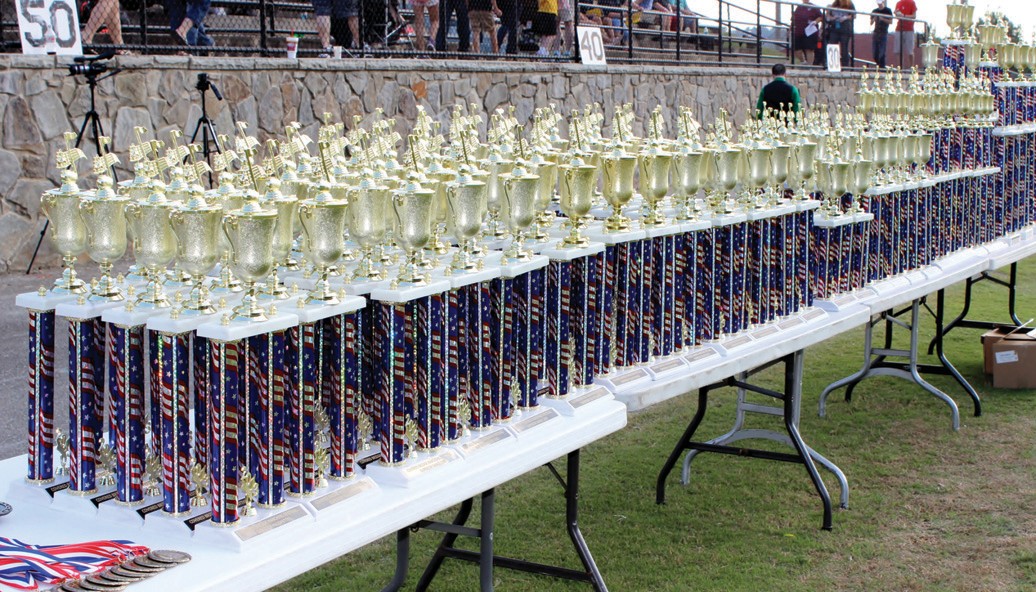 Tables groan under the weight of more than 100 trophies awarded to bands in various categories of performance excellence.

Two nights later on Oct. 5, those same bands (except Hayden) plus 15 more from outside the county – totaling more than 1800 members – assembled at Oneonta High School for the 14th annual Covered Bridge Marching Band Festival. Gilbreath Stadium was filled to capacity as 5000 or more watched the competition, judged by a panel of specialists in the various performance disciplines. The Oneonta Redskin Band hosted the event and performed in exhibition (along with the Birmingham Southern Panther Pride Band), but did not take part in the competition.

Eleven bands, including Susan Moore, Cleveland, J.B. Pennington, and Locust Fork, won awards for excellence in size categories from 1A to 4A. Best in class awards were given for drum majors, majorettes, dance lines, color guards, percussion, and full bands in classes 1A, 2A, 3A, and 4A. First- through third- place awards were given for the highest total scores in a battery of categories in each of two divisions, one being Class 1A and 2A schools, the other Class 3A and 4A schools.

If you figure for each of the 400-plus band members in the county there are two parents, a sibling or two, and a few close relatives who are involved to a greater or lesser degree, an estimate of 2000 more or less who support band programs in the county, though not rocket science, isn’t completely unreasonable. In some families, there are multiple band members. Some examples appear in accompanying photos.