Athlete with local ties to compete for U.S.A. 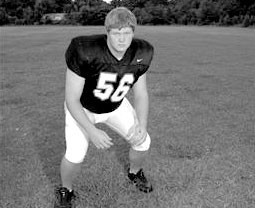 Evan Swindall, of LaFayette, Ga., has been selected to play for USA Football’s 2009 Junior National Team.

The tournament will be played at Canton’s historic Fawcett Stadium, home of the NFL’s Hall of Fame Game, and adjacent to the Pro Football Hall of Fame.

Swindall, a 6’3, 290-lb. offensive lineman, was an allstate selection his senior year and has signed with Ole Miss.

Evan’s parents are former Oneonta residents Perry and Michelle (Egan) Swindall and he is the grandson of Buddy and Mot Egan of Highland Lake.