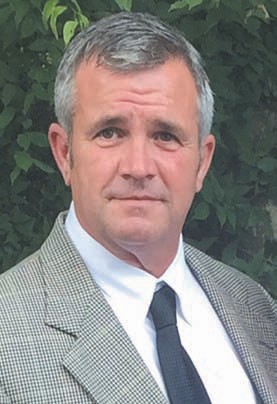 TBC: Are you actively working against it? Armstrong: “I’m just answering questions when people ask me about it. I’m getting quite a few questions about it – many on social media, some when I’m out on the job, a few from people who call me or text me on the phone. I’m not going out and talking to groups and there’s no organized group of people working against it, but there are a number of people opposed to it who’ll tell you why if you ask. But I’m getting more and more questions as the election gets closer.”

TBC: What do you tell people as to why you oppose it? Armstrong: “It’s a bad plan for maintaining roads. Using only half of the proceeds for roads is not enough for people to be able to see any difference. If all the $3 million in annual proceeds went to roads, it might be enough where people could see a difference, and I might – might – be able to support it. But with it being just $1.5 million, we’re only going to be able to fix less than 100 miles of road – less than 10 percent of the total road miles in the county – so most people won’t see any difference, and I don’t want people coming up to me and asking “what are y’all doing with all our tax money – I don’t see it anywhere?’ We’re doing the work up front, then paying for it for years to come on the backside.” TBC note: Paraphrasing Armstrong’s further explanation, he said the tax money will be used to pay off a bond issue – a loan to pave the roads that have been selected. The roads will be paved over a roughly three-year period, he said, but the bond issue will not be paid off for a period of at least 10 years. After the roads are paved, seven or more years will pass (the “backside”) with no more special paving projects. Then another bond issue will be floated to pave another series of road projects, he said. Armstrong: “I’ll tell you something else. That $50,000 that’s gonna be split between 22 fire departments – that’s, what, $2,300 apiece? That’s not enough to properly equip a department, $2,300 isn’t going solve their problems. You know, at least a couple of fire departments are considering creating fire districts to collect fire dues from citizens on a mandatory basis. If it’s passed, this sales tax will kill that for years to come. People will say, ‘well, you already got those taxes we just passed,’ and that’ll be the end of it.

“Same thing applies to the municipalities. It’ll cripple the towns that were looking at passing a sales tax of their own. People will figure that the towns got their cut of this sales tax increase, and they’ll just be out of luck trying to persuade people to vote any more taxes for years to come.” TBC: What about the money for schools? No institutions in the county are as seriously strapped as both school systems, and your district would benefit greatly from capital projects from the Blount County School System, because 30 percent of their investment is concentrated here. Armstrong: “I know the schools need money. My daughter is about to graduate from Hayden High School, and my son is in the seventh grade. But, however much they need it, the schools didn’t come to us at the commission asking for more money. If the schools need money, then let them propose a tax just for the schools that’s adequate to do the job and let people vote on it. We need to fix the schools. We need to fix the roads. We can either fix the schools or we can fix the roads, but handing out a little bit of money that’s not enough to do the job to everybody in sight is not the way to do it.” TBC: So tie it up in a neat sound bite for people. Why do you think people shouldn’t vote for the tax increase? Armstrong: “The road plan is a bad plan. It’s totally inadequate. Most people won’t see any results because it doesn’t go nearly far enough. What started out as a plan focussed on fixing roads turned into anything but, because the proceeds are split so many ways to get more people to support it. I don’t want to paint a rainbow picture that this is going to solve our road problems, because it won’t, but that’s what people are going to expect if they vote for this tax. Plus, if this tax increase passes, you won’t pass anything else for a long time to come – fire departments, schools, towns, anything. Another thing we didn’t even talk about: this election is a really bad time to vote on this. People are upset with government in general, and they’ll going to let us know at the polls in November. I think the tax increase will fail as a result.” TBC: Briefly, what would you have done differently to fix the roads if it had been up to you? Armstrong: “I would have been more in tune with it if it had been done on a sunset basis. There’s no sunset to this plan. Once the tax increase is passed, it’s there forever. I think we should have identified a certain number of roads to be repaved and upgraded, estimated the money it would take to do that much, then put the total plan to a vote. Then people could decided yes or no, but the tax would not continue once the projects were done. When the first set of projects are finished, select another group of roads to fix, and let people decide whether they want to make the money available to fix them or not. It’s a pay-as- you-go plan, and you get to decide whether to provide the money to do it at each step of the way.”