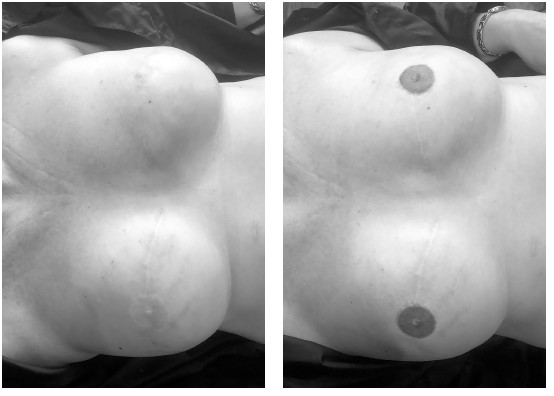 Before (left) and after (right) areola restoration. The before picture was taken at consultation after reconstrutive and plastic surgery. The after photo is immediately following the areola restoration procedure. -Micro Blading Alabama

When a person has undergone a mastectomy or other breast surgery, they most likely will have total or inconsistent nipple and areola loss. This may sound insignificant, but for many, the loss can add to one’s already low confidence level. Thankfully, for those who choose, a procedure called areola restoration is available at a minimal cost.

Areola restoration is a permanent paramedical 3-D tattoo procedure to replicate the areola and nipple. It involves highlighting and shading of the nipple and areola area. Seen as nothing short of a miracle by many, this permanent repigmentation procedure helps restore the natural beauty of the breasts.

According to Shannon Randolph with Micro Blading Alabama in Cullman, areola restoration is a two-step process that looks natural and gives some texture back to the damaged area. The permanent procedure gives women and men the size, color, and shape of the nipple they desire, as well as recreating perfectly symmetrical and naturally colored nipples.

Since her business began in 2005, Randolph says areola restoration has become a popular way to camouflage scars and reiterated how it gives many clients a better feeling with their self-image. Randolph said the paramedical tattoo procedure can begin once the incisions are healed and a person has been released from their doctor. It is a two-step process that can be completed during the reconstruction process or at a later date.

The cost for areola restoration at Micro Blading Alabama is generally around $175 for the first appointment and $100 for the second appointment. In some cases, insurance will cover the associated costs.

Areola restoration can also benefit clients who may not have breast related surgeries. The same procedure is used for clients who have irregular or fading areolas. For men who wish to enhance the appearance of their areolas due to fading or to increase their size, this non-surgical procedure may be the option they are looking for in an attempt to have a more natural look.