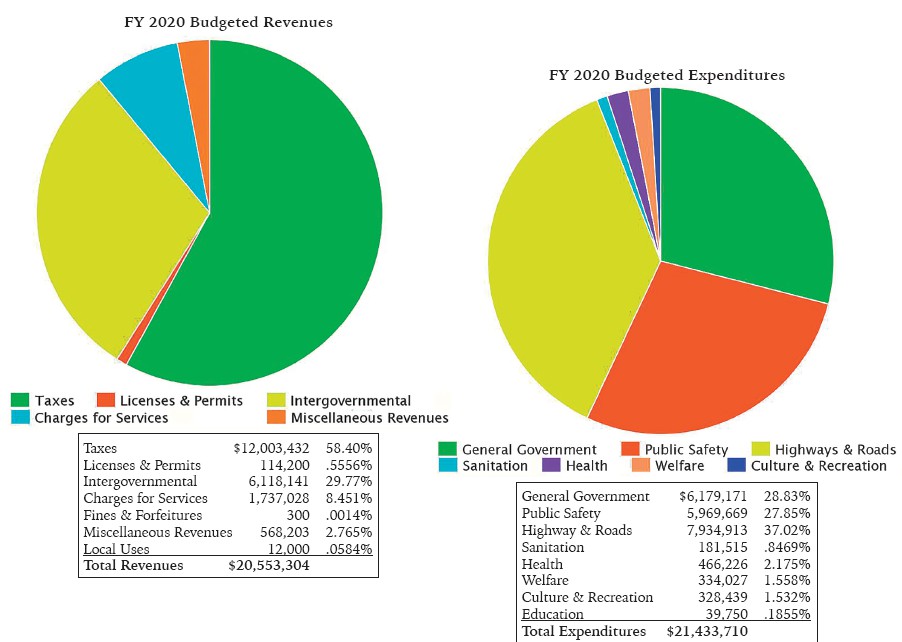 Expenditures budgeted for individual district road maintenance and improvement operations totaled $4,177,484, an increase of $52,727 more than last year. The total was broken down by districts according to a complex formula based on several factors and adopted collegially by consensus of the commission, as follows (rounded to the nearest dollar):

Commission chairman Chris Green prepares an annual summary of county budget highlights for the public’s benefit. The following quotes and condensed information are taken from that document.

“This is the first year in the history of Blount County that the general fund budgeted revenue is projected to exceed $10 million. This is due largely to an increase in projected sales and use tax revenues and property tax revenue. Property taxes have not increased, but the value of real property in the county has increased according to the analysis of the Alabama Department of Revenue. The county is also set to receive an additional $600,000 earmarked exclusively for road projects made possible through the Rebuild Alabama Act approved by the state Legislature earlier this year.

“Increases to the county general fund are making it possible to give county and sheriff’s department employees an across-the-board 3.14 percent step raise. Although cost-of-living adjustments have been occasionally included in the county budget, this will be the first time since the adoption of the original pay plan in 2003 that (such a) raise has been given. The county commission is also proud to include in the general budget its annual commitment to the construction of the Wallace State Community College building.”

Green outlined the following special projects of importance to the county and included or to be included in the 2020 budget.

• a new $5,000,000 Department of Human Resources building funded by a bond issue serviced by the State of Alabama; completion scheduled by the end of 2020.

• county jail addition largely in keeping with the work release-oriented recommendation of the Blount County Jail Task Force. Completion expected by the end of 2020.

• continue responding to courthouse security concerns to assure the safety of county employees who work there and citizens who visit there.

• develop a partnership plan with the City of Oneonta to define and support the continuing mission of the Blount County-Oneonta Agri-Business Center and surrounding property; to be included in budget by amendment when requirement is finalized.

Green concluded by singling out county administrator John Bullard and county engineer Dustin Stewart for special recognition for their outstanding contributions, as well Jacki Goode and other members of the county commission staff for their unvarying quality support.

In addition to adopting the 2020 budget, the commission took action on three other matters. It

• approved a resolution to vacate unnamed, undeveloped road reserved on the plat known as J. E. and D. E. Wilson Lands Subdivision in District 3 on behalf of the estate of Randy Earl Copeland.

• approved purchase of a backhoe for District 1 from Thompson Tractor Company through the National Joint Purchasing Alliance – to be financed through Fund 200 for $107,620.

• authorized the bid for the purchase of four pickup trucks, one for each district, with $125,000 budgeted to cover the cost.

• convened an executive session at the recommendation of county attorneys to discuss pending litigation, returning and adjourning without taking further action.