Appalachian gets past Cleveland 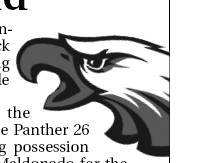 The Appalachian Eagles took advantage of five Cleveland turnovers to pick up a 22-7 victory over the visiting Panthers last Thursday night at Eagle Stadium.

On Cleveland’s opening drive, the Panthers fumbled the ball away at the Panther 26 and on the first play of the ensuing possession Cameron Cox lofted a pass to Oziel Maldonado for the touchdown. Onaldo Maldonado drilled the extra point and the Eagles led 7-0.

The score stayed that way until midway through the second quarter when the Eagle defense recovered a Panther fumble at midfield.

The Eagle offense moved 41 yards on the subsequent possession and Cox fired a 21-yard touchdown pass to Billy Frederick . The extra point was good and and Cleveland took the 14-0 lead to the half.

After an exchange of turnovers early in the third period, the host Eagles finally got some offense going.

Starting from their own 44 after a Panther punt, the Eagles drove 56 yards in a methodical possession that burned more than five minutes off the clock. Cox scored on a 1-yard run and then added the two-point conversion on a trick play after lining up in field-goal formation and the Eagle lead was 22-0 with 9:42 to play.

Cleveland avoided the shutout when Christian Collum found Trevor Yates on a 42-yard touchdown pass with 37 seconds left. Jose Gonzalez added the kick to set the final score at 22-7.

Yates led the Panthers with 65 yards rushing on six carries to go with the 42-yard touchdown reception.

Christian Collum completed 4 of 10 passing for 80 yards with one touchdown and one interception.

Cox completed 9 of 14 passing for 118 yards with two touchdown and two interceptions and rushed for 64 yards and a touchdown on 16 carries.

Appalachian’s Cory King registered a game-high 10 tackles and added a fumble recovery and a sack. Dustin Brady had an interception while Cox, Oziel Maldonado, and Greg Stanley had fumble recoveries.

Cleveland finishes the year at 3-7 while Appalachian (5-4) travels to Collinsville (9-1) this week for the first round of the 1A playoffs.