Commissioner Allen Armstrong (fourth from left) and county administrator Ralph Mitchell (third from right) pose with some of the hard workers who picked up pounds of litter to earn checks in the PALS cleanup campaign.

The recycling program is included in the garbage contract, recently renewed by the county. Mitchell pointed out that no rate increase will be made during the contract period, and all volunteer fire departments in the county will receive garbage pickup at their facilities at no charge. 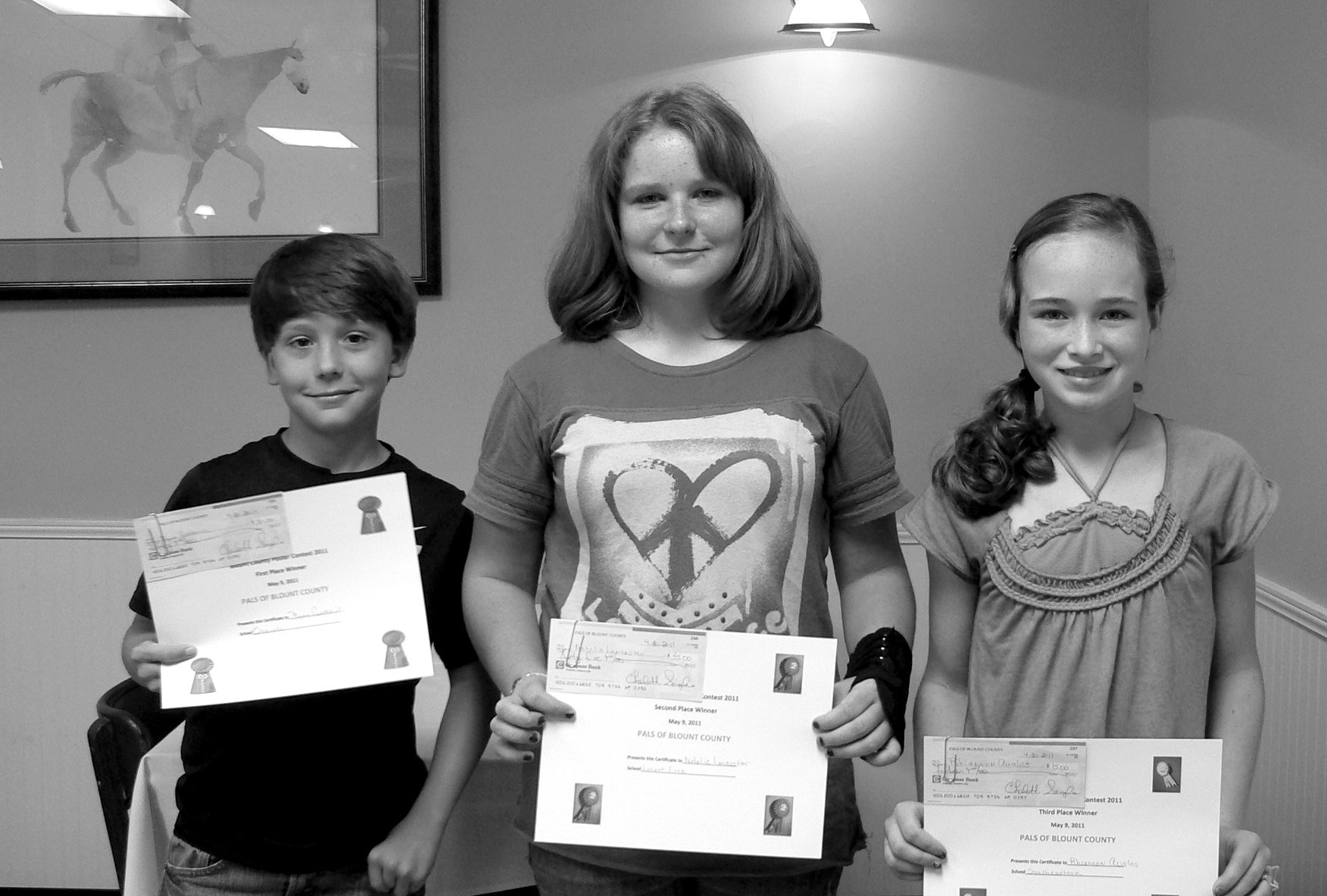 Ryan Guthrie, Natalie Lancaster, and Rhiannon Avalos display certificates and checks they received as winners of the PALS poster contest.

The contract includes 10 hours per month to clean up illegal dumping sites, according to Mitchell. He said David Standridge, probate judge, has been working with the Blount County Sheriff’s Department and the CrimeStoppers program to stop the illegal dumping, especially that of tires. Residents of the county who spot illegal dumping are encouraged to contact the sheriff’s office at 625- 4127 or CrimeStoppers at 274-2746. Cash rewards are offered for those who report these illegal activities.

Luncheon attendees were excited to learn about the proposed recycling program. Mitchell said Hayden Elementary School presently has a recycling location but that the site has been used mainly by the school as a teaching tool. That school will continue as one of four proposed recycling locations in Blount County, although it has not yet been decided whether it will be opened for public use. The other three will be located in the Hayden/western Blount County area near the existing landfill, at Cleveland near the Blount County Water Authority offices, and in Oneonta. PALS pickup program

Mitchell presented checks totaling $4000 to 11 participants in the PALS (People Against A Littlered State) pickup campaign April 1 – April 15. These 11 groups collected 15,740 pounds of roadside litter and registered the amounts at the county landfill. In return for for their hard work, they earned some 25.4 cents per pound from the Blount County Commission.

Rep. Elwyn Thomas attended the luncheon to present checks to winners of the PALS poster contest. Most of the 844 fifth-grade students in Blount County and Oneonta City schools participated in this contest, following the 2011 theme “The Environmental Challenge in Alabama.”

Ryan Guthrie of Oneonta received a $50 check for his first-place poster. Natalie Lancaster of Locust Fork earned $35 for second place, and Rhiannon Avalos of Southeastern, $15 for third place. All three were awarded certificates also.

School winners received certificates and cash prizes of $25 for first, $15 for second, and $10 for third. All three winners in the eight participating schools will be judged in the state competition. They are listed below in order of place (first, second, and third):

Several students earned honorable mention, and their posters will be displayed at this year’s Blount County fair.