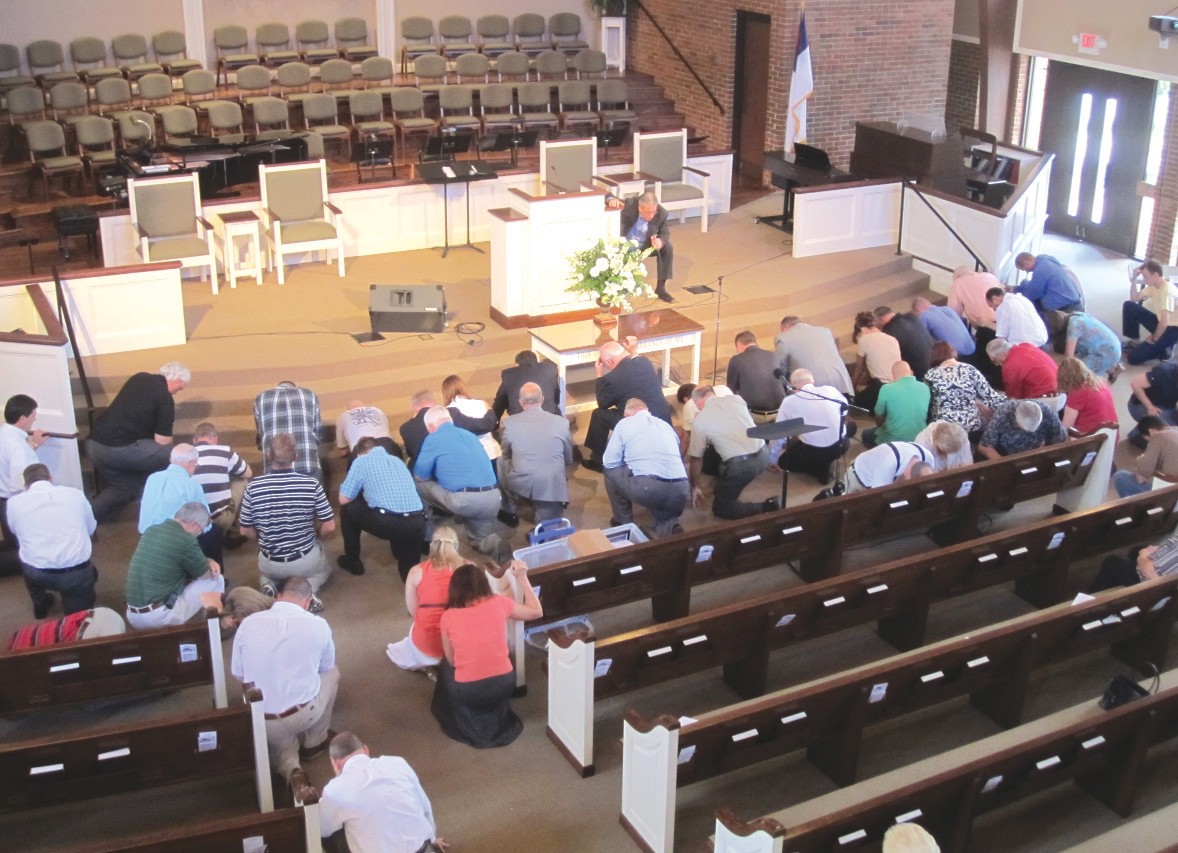 Responding to the recent announcement by Citizens for Blount County’s Future of a petition-collecting drive for a referendum to legalize alcohol sales in the county, Oneonta First Baptist Church pastor Larry Gipson opened the anti-alcohol meeting with an appeal for the group to be compassionate toward their opponents while remaining true to themselves as “men and women of courage and conviction.”

He then invited participants forward to kneel at the altar, for an old-fashioned communal prayer for Divine guidance.

Then, the gloves came off. Pointing out that he had spent several years of his ministry career serving churches in the “wet” stronghold of Jefferson County, he set the stage for the meeting with a forceful statement: “I can tell you that everything they’re (alcohol proponents) telling you about roads and schools is a lie.”

The theme was later repeated in more nuanced form by guest speaker Joe Godfrey of Alabama Citizens Action Program (ALCAP), who acknowledged that although increased tax proceeds from alcohol sales would indeed go to county schools and roads, they would be wholly or partially offset by significantly increased social costs associated with increased alcohol availability.

•Though ultimately a failure as national policy, statistics for the period prove Prohibition did work over the 14 years the amendment was in effect to significantly reduce alcohol-related diseases, work-time losses, and domestic violence.

•Godfrey said the destructive effects of alcohol are evident in many families, including his own. He and his wife are helping to raise three grandchildren because his daughter’s husband “couldn’t keep away from alcohol.” Many families experience similar tragedies, he said.

•$23.5 billion is spent annually in the U.S. to “clean up the mess” caused by alcohol-related problems.

•ALCAP sponsors the American Character Building program for school-age children, which includes kits for classrooms on subjects including anti-alcohol, anti-tobacco, anti-drugs, and anti-bullying. Kits include leaders guide, slide presentation, 30 student booklets and a CD. Kits are available for $99 apiece. Apologizing for the cost, Godfrey suggested approaching the schools about using the antialcohol kits in connection with the wet/dry campaign, as well as using the full range of kits as appropriate in churchbased programs for both youth and adults.

•ALCAP also provides other resources including handouts on anti-alcohol facts, statistics and issues; a series of brochures on alcohol-related subjects; and a detailed binder “Organizing for a Local Option Election” for leaders who are preparing for an anti-alcohol campaign. (No attempt is made here to summarize that substantial volume of material.)

The Alabama Citizens Action Program (ALCAP) is an interdenominational organization that acts as a legislative lobby on behalf of churches on a range of moral and addiction-related issues. It has an active school program dedicated to helping children to make moral choices and avoid substance abuse. A board of directors representing eight denominations governs the group. It is financed through support of member denominations, and through donations from citizens, individual churches, companies, and community organizations.

Gipson said early in the meeting that the local group has about $5,000 in the bank currently to devote to the anti-alcohol campaign. In closing, he noted that more money will be needed and that churches would be contacted about future meetings and included in forthcoming organizing efforts. He appealed for donations from both churches and individuals, assuring that all contributions will be deposited into the Keep Blount County Special campaign fund and rigorously accounted for.

According to section 28-2-1 of the Code of Alabama, a referendum to determine5the wet/dry status of the county must be held “upon the petition of 25 percent of the number of voters voting in the last preceding general election being filed with the probate judge of said county.” The number voting in the last general election held in Blount County was 17,001 – 25 percent of that number is 4,250.25. Only names of qualified voters will be counted as valid toward that total. (At present, Ronny Branham of Citizens for Blount County’s Future says the group has collected about 2,000 signatures.)

The Code of Alabama continues: “Said election shall be held within not less than 30 days, nor more than 45 days, from the date of filing of said petition and notice thereof shall be given by the probate judge by publication at least three weeks before the date of said election, in a newspaper in the county…”

To be on the ballot for the Nov. 6 general election this year, the petition must be filed with the probate judge between Sept. 22 and Oct. 7, by the calendar. Since both of those days fall on a weekend, the actual target dates will be Sept. 21 and Oct. 5. Names on petitions may be submitted cumulatively as they are collected before Sept. 21 to allow the probate office adequate time to verify them for validity. If the referendum is to be held on Nov. 6, it must be announced in the newspaper by no later than Wednesday Oct. 10.