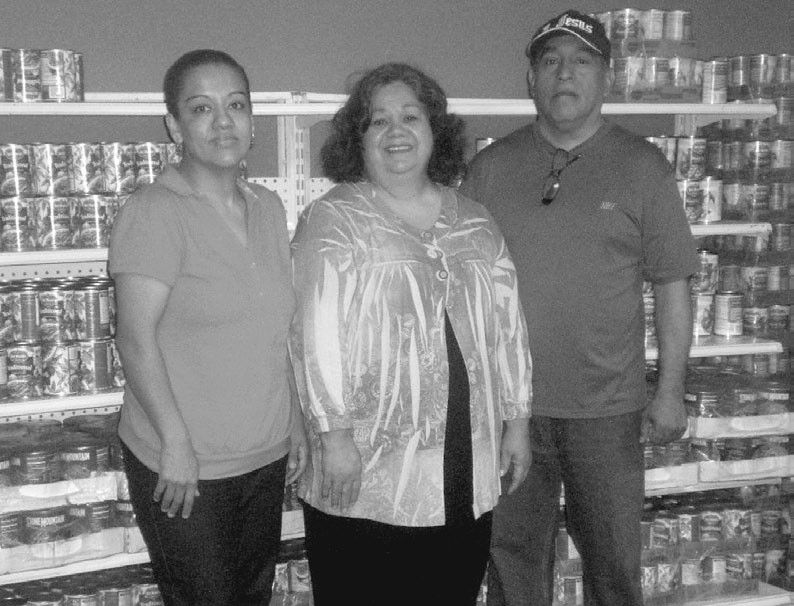 Pictured at the Blountsville Hispanic Church of God food bank are (from left) Cruz Cerventes, Emma Colunga, and Jesse Colunga.

Jesse Colunga had a dream that quickly became reality. A member of the Blountsville Hispanic Church of God – Christ is Coming, Colunga had heard several times of food kitchens throughout the Christian community. But, Colunga knew that even though many of the food pantries were less than 20 miles away, to the needy in his community, they may as well be in another country. Never discouraged, Colunga and his wife began to pray.


Within a few weeks, in February 2009, the Blountsville Hispanic Church of God opened its doors, giving donated food items to anyone who asked. That day, he registered 56 families. By July of this year, only five months later, a staggering 263 had registered.

Colunga expeditiously learned the protocol for receiving more donations, and the food bank now partners with United Way of Birmingham (James McCrary). Walmart in Oneonta has expressed an interest in contributing as well.


Although a so-named Hispanic church, the congregation proudly consider themselves multicultural, with members and attendees from around the globe and an interpreter at every service. “We will never turn anyone away, no matter what color they are,” says Colunga. “Our purpose is to help to do whatever God wants us to do.”

Founded in 2005, the Blountsville Hispanic Church of God – Christ is Coming has no plans of stopping here. Its members hope the food bank is only the beginning. The next step for outreach, they pray, will be a kitchen so that meals can be cooked, served warm, provided, and, possibly, even delivered. With faith even as small as a mustard seed and a good idea, there are no limits; as for angels – they speak every language; all you have to do is listen.

a brief synopsis to ll.pitts@
yahoo.com