And the bands march on

Above: The Appalachian Soaring Eagle Band performs at halftime. Right: Colorguard was added to the band this year. -Appalachian Media

Even though marching bands spend most of their time practicing, entertaining crowds, supporting football teams, and performing halftime shows under the lights, their journey does not come to an end as football season winds down. There are still many events to come and more reasons to “strike up the band.”

This year all eight high schools in the county had marching bands. Some had only a few members, while other schools had more than 100. Despite the size, all of the bands did an excellent job both on and off the field.

The Appalachian Soaring Eagles consisted of 32 performers on the field each Friday night. Colorguard was added to performances this year and all the members did an amazing job as the Latin sounds of La Musica es Vida! permeated the stands. Band director Crist Sperling said the Latin theme program (which translates Music is Life!) was chosen to reflect the diversity within the local community. 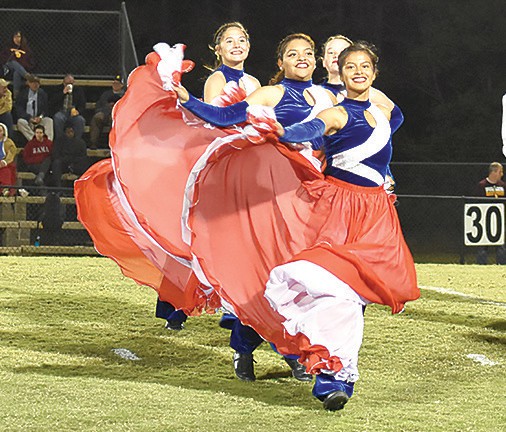 The Soaring Eagles competed in their first competitions this year. They received an overall one rating at the Covered Bridge Marching Festival and straight ones at the Pride of Hayden Marching Competition. The band marched in the Veteran’s Day parade and will participate in the Blount County Christmas Parade on Dec. 10. Sperling said, “Our band has made tremendous progress in our second season. The community support for our music program has been outstanding.”

Cleveland’s Golden Force Marching Band had another outstanding year. Under the direction of Thomas Duke and featuring 34 members, their Alabama themed halftime show was truly a sight to see and hear.

In addition to working on the halftime show, the Golden Force Band provided stiff competition at the Midsouth Marching Competition and the Covered Bridge Marching Festival. At both events, the band scored all superior ratings. The Golden Force Band marched in the Veteran’s Day parade and will participated in the Blount County Christmas parade as well. Duke also noted that six students received band scholarships for the 2019 graduation year.

On the county’s west side, Hayden has been fortunate to have the Pride of Hayden Marching Band sending magnificent sounds throughout the football stands, as well as representing the county at both the Midsouth Marching Festival in Gadsden and the Lake Martin Invitational in Alexander City. The band earned superior and excellent ratings at these two competitions.

The 133 band members took “pride” in their “Yellowhammer” halftime show this year. The show celebrated Alabama’s Bicentennial with music that represented our state. Selections included My Home’s in Alabama, Mountain Music, Fly Me to the Moon, All Night Long, Alabama Jubilee, and Sweet Home Alabama. The Pride of Hayden is under the direction of Jonathon Steinman.

Blountsville’s J.B. Pennington High School Marching Tiger Band has been in the football stadium each Friday night to showcase both their music and marching skills. The 72-member band proudly hosted the Blount County Night of Bands, and according to band director Elizabeth Boone, “Had a great time enjoying the performances from the schools in our county.”

The Tiger band will march in two Christmas parades this year: the Blount County Christmas Parade and the Blountsville Christmas parade. They participated in the Veteran’s Day Parade and two band competitions in Hartselle and Hayden. Both events earned all superior ratings for the band. Also, their drum major received best in class drum major at the Pride of Hayden Marching Festival.

Oneonta’s Redskin Band has provided another stellar year for the students and fans. With 140 members, the band proudly transmitted the familiar sounds of The Lion King during their halftime performance. The band competed in the Pride of the Valley Marching competition in Pinson where they received all superior ratings. They were scheduled to march at the Covered Bridge Marching Festival, but were unable to do so due to rain.

In addition to winding down the football season as they travel to the second round of the playoffs, the Redskin band will focus on perfecting their marching skills as they prepare for the Nashville and Franklin, Tenn., Christmas parades on Dec. 7, and the Blount County Christmas Parade. The band is under the leadership of David Bearden.

Last, but certainly not least, features the achievements of the Southeastern Marching Mustang Band. This football season provided opportunity for the 22-member band to march on the field for the first time in the school’s history.

The nine drum line members and 13 horn players dazzled the audience with two pop culture tunes, That’s What I Like by Bruno Mars and The Middle by Maren Morris and Zeed. The Bruno Mars tune also included a drum solo. The band did not compete in any competitions this year, but they do look forward to attending some in the future. Beginning next year, plans are to incorporate a colorguard into the band performances.

Attempts were made to obtain information from the band director for the Susan Moore Bulldog band; however, no response was received.