“…and he shall direct thy paths” 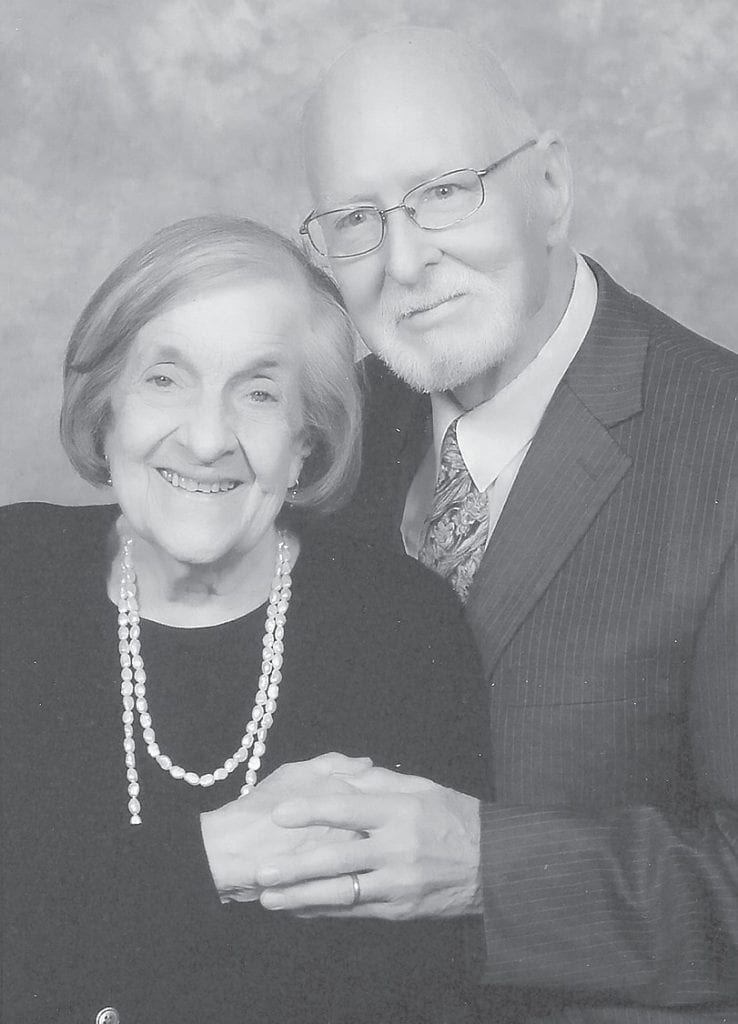 He and his wife had welcomed music students from the school to weekly meals and snacks at their home. Those students have been among his best friends and have invited him to share in several of their own milestones.

In solitude at the retired couple’s Muscle Shoals residence, he considered his long life and the particular relevance of the end of that passage, promising Gods’ direction. Bynum claims he realized he had never interviewed for any of the major positions he held in his life of service.

His life began as the younger son of tenant farmers Lambert and Katie Clark Bynum. The elder Bynum lost his farm in the depths of the Great Depression before Alton’s birth in 1933. The family, which included Alton’s 10-year older brother, J.D. Coy, and five-year older sister, Estell, lived variously in the Sand Valley area beyond Lebanon Methodist Church, on Straight Mountain, in Locust Fork, and in Rosa while Alton matured.

At age four, for nearly a year, he lay stricken with typhoid fever and faced doubts from the Denton brother doctors (Marvin and Nathan) that he would survive. He reports that buttermilk and saltines comprised his only food for weeks during recovery.

The family had few resources, but one included a relative-provided battery-operated radio. Alton loved listening to classical music every chance he got. That taste did not match the family’s, so he says he heard a lot of Grand Ole Opry and radio evangelist gospel.

His father had but a fourth grade education and his mother a fifth. The two expected him to contribute to the family by quitting school, working the livestock, and helping grow corn and cotton. Alton wanted more.

He left home at 14 to continue his education, living with his aunt Pearline Bynum Cornelius (later Wilson), her first husband “Witt” (Peter Whitfield) Cornelius, and their family in Oneonta. He claims he partly viewed his departure as a test to see if his parents would come take him home; they did not.

Alton found work to provide for himself. He says he took a job with a local bakery, toiling a total of five and a half hours a day before and after school.

When the Cornelius family relocated, Alton moved to a nearby basement and survived on bakery leftovers. Somehow, recently-widowed Oneonta teacher Grace Cowden learned of his plight. Viewing his room one day after having driven him home, she told the high school junior to gather his clothes, quit the bakery, move into her house, tend her yard, and maintain her car.

While he did odd jobs at Cowden’s house, he claims the childless homemaker insisted his school work came first. She would have him complete that and then join her each evening for canasta, a game he never recalls playing afterwards.

He cherished his educational opportunities and appreciated the help others provided him. Bynum says that because of his health and situation he dropped behind in school. He needed junior English to advance with his regular class. Teacher Estelle Nation volunteered to work with him the summer before his senior year to make up that course.

Presaging his life’s future direction, Bynum took piano lessons from his father’s first cousin Hallie Gay Bynum (Mrs. Lester Hoyt) Murphree. He sang in the school choir and a gospel quartet with cousin Jerry Cornelius, and friends Dan Moore and James Tolbert. During the time, he occasionally directed the fledgling choir at the local Christian and Missionary Alliance (C&MA) church.

He believes it was because of Cowden that Birmingham-Southern College offered him a tuition scholarship. He has cited two reasons for his failure to accept that offer. First, he says he knew he could not afford the additional costs, and second, he reports having been deeply affected by the accidental death of a high school classmate.

He explains he became acquainted with both Grant Cornelius Sr. and Jr. at church. Through the two, he learned of the C&MA Toccoa Falls Institute (now, college) in extreme northeastern Georgia and decided to apply there. The conservative, evangelical Toccoa, which emphasized practical manual training with its religious instruction, required students to work a minimum seven hours a week toward their costs by helping maintain the campus and supply food.

“Trust in the LORD with all thine heart; and lean not unto thine own understanding.”

A 1999 retirement article reports the minister’s words at the funeral of the Bynum classmate that sent Alton on a spiritual journey. He held, ‘I needed a rational response to everything.’

In an April interview, Bynum says he was “brought up in church” but he “never had the feeling I was okay (spiritually). I had to do more to get to heaven — what could I do to earn my salvation?”

A Toccoa quartet in which Bynum sang appeared at a multi-day regional church conference in Montgomery. There, a New York minister revealed a new insight of the gospel for Bynum. The 1999 article quotes Bynum, “…[I] wasn’t actually converted until my junior year. It took me a long time to grasp” that as he said in a youtube interview, “I had nothing to do with my salvation. Christ had already done what I needed.”

Beyond his seven required hours of labor, Bynum held a 40-hour-a-week job at a plastic laminating factory. Since the college offered no music degree, Bynum majored in education, while taking all the music and Bible courses he could.

In the aforementioned article, Bynum again revealed additional help he received. “Professor Susie Mathes noticed my plight and invited me to live at her home and take care of invalid relatives. It was through her strong influence and encouragement I chose a career in music.” The article elaborates, “Mathes also stood in as Alton’s mother when his parents didn’t attend his wedding.”

As for that wedding, the Institute not only provided Bynum with an education, but also his wife. School policy would only allow seniors to date. Even then couples had to have a staff person along as a chaperone. College business course teacher and bookstore manager Judith Miller became Bynum’s chaperone.

Bynum shares that on his dates to off-campus basketball games, he found himself giving Judith more popcorn than his dates. In 1956, the year after his college graduation, the two married.

The remainder of Bynum’s life continues along the path of the Proverbs passage. His first job out of college was as a choir director and assistant pastor. He says he was not eager to accept the pastoral role at the Asheville, N.C., church. Indicative of his hurried pace, he has shared humorously, that on his first Sunday at the church and in the preacher’s absence, he made a radio broadcast, taught a college Sunday school class, preached the regular sermon, conducted a 1 p.m. funeral, drove 70 miles for a graveside service, returned, preached the evening service, and performed his music responsibilities as well.

“In all thy ways, acknowledge him;”

“The jobs I held had nothing to do with my talent. It was Christ living his life in me. My life has been filled with my faith,” Bynum noted in the recent interview.

Bynum’s service from that hectic first post-college experience unfolds nearly miraculously; so many positions intertwine with prior experiences. In the spring of Bynum’s second year at that church, the headmaster of the prestigious Ben Lippen boarding and day school in Asheville (since relocated to Columbia, S.C.) asked Bynum to accept a teaching position there.

Some four years later (1960), the New York minister, who in Montgomery had explained salvation to Bynum, invited him to The Gospel Tabernacle in Manhattan to direct the choir. While working various tasks there, Bynum enrolled in Nyac college, another C&MA school.

Nyac would accept credits from Toccoa, and he could finally major in music. He met the Nyac proficiency requirement on each of the instruments of the orchestra and obtained a second bachelor’s degree there.

During this time, a former Ben Lippen student, whose father served as dean at conservative, non-denominational Gordon College, recommended Bynum. Bynum spent the rest of his teaching career (1964-1999) at Gordon.

There, Bynum transformed its musical classes with a lumber-propped piano, five students, and a rain-flooding carriage house building to a nationally and internationally recognized program. He led the department to accreditation, normally a minimal 15 year process, in three years.

He would obtain a master’s degree from the Boston Conservancy before beginning Ph.D. work at Boston University. After learning that Southern (Baptist) Seminary in Louisville did not charge tuition, he enrolled there. Again through fortuitous circumstances, he learned that New Orleans Seminary (also Southern Baptist) would teach courses to individual students rather than requiring a minimum number. He transferred to obtain his terminal degree there in late 1975.

That mission outreach has included choir tours. Bynum, with 35 of his choir members, toured Greece and the Czech Republic six months prior to his retirement. With that choir and others, Bynum has directed tours to England, the European continent, and the South, including a 1979 performance at Oneonta’s Lester Memorial UMC.

He and Judith have two children, Alton Jr., superintendent of grounds at Gordon, and Dawn Marie (King), an Alabama mother and homemaker. Bynum has enjoyed visits with friends from his 1951 Blount County High School graduating class. Now suffering macular degeneration and devoting much of each day to his wife’s needs, Bynum fears he may not be able to share again with these caring friends.