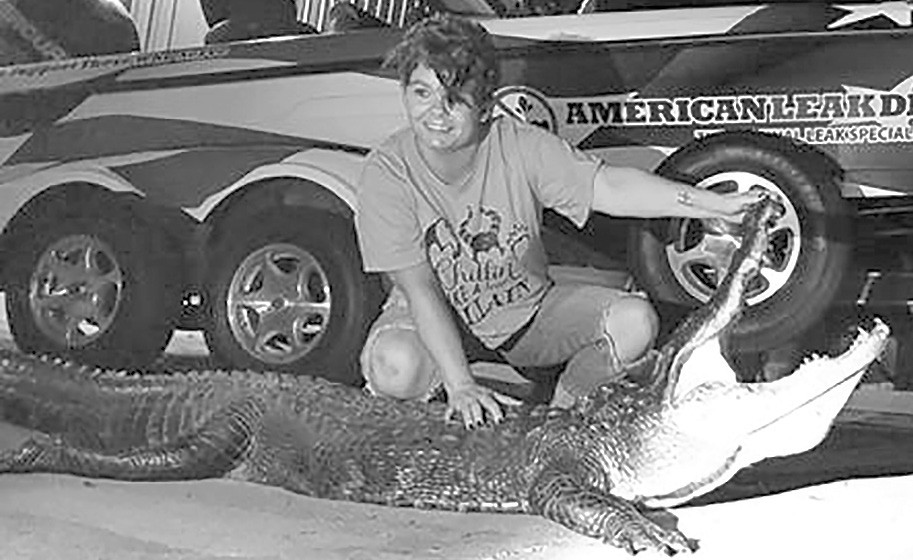 It’s not every day you catch an alligator, but Windy Bradford from Hayden did just that. It has been a goal of hers ever since her father-in-law, Donnie Bradford, first mentioned alligator hunting to her. He had been and they were scheduled to go last year, but unfortunately she was unable to go due to her having back surgery.

That wasn’t going to stop her from trying again this year.

Alligator hunting season opened June 4 and they applied for an Alligator Possession Tag and waited to see if they would be chosen to receive one of the tags that are awarded via a computer-controlled lottery. She was excited when she was notified that she received a tag. So, along with her father-in-law and her husband Joey, they made the journey to Lake Eufaula. She completed her mandatory Alligator Training Course beforehand and her guide also went over more information before the hunt began. One of the lessons she learned was how to use a harpoon.

This type of hunting happens at night, in swamp-like waters. As they ventured off to begin the hunt, Windy was so excited. They spotted an alligator hours later. Her guide estimated it was a 5-footer, but Windy wanted to wait and see if they could find a larger one. He asked if she was sure she wanted to wait and told her they may not see another one at all. She told him she wanted a bigger one and if they didn’t find one, she would be happy because she was just excited to be on this trip.

Hours later, they spotted the one she had hoped for. This one was larger than the last. The guide used a big rod and reel with a four-inch hook and reeled it near the boat. Harpoon in hand, Windy impaled her first alligator. They pulled it closer to the boat and Windy and her father-in-law pulled it into the boat. Her guide made a comment that she didn’t even break a nail. (Windy always keeps her fingernails well-manicured.)

Windy’s catch measured 9.5 feet long and weighed 204 pounds — perhaps one of the largest female alligators caught in Alabama. Windy has even received a call from a wildlife magazine for a future interview.

After the alligator was caught and tagged, her guide took it and had it processed for her. Now her freezer is filled with 47 pounds of fresh alligator meat. Her favorite dish is alligator bites.