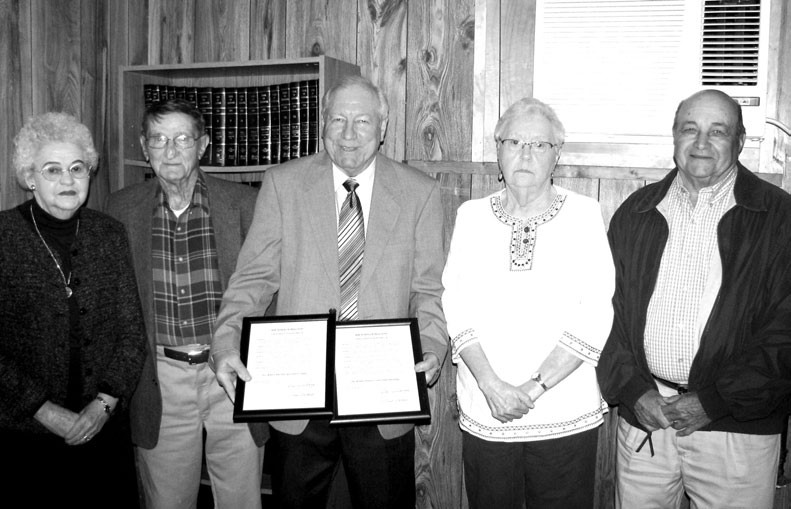 Allgood Mayor Gene Armstrong (center) holds plaques of celebration to be awarded in recognition of 50th wedding anniversaries to (from left) Lyda Mae and Cecil Standridge and Johnnie and Marshall Baker. Also noted but not at the ceremony were James and Doris Loyd and Willie and Sharon Mayes.

In their March 8 meeting, Allgood Mayor Gene Armstrong and all members of the town council honored each of four resident couples for their more than 50 years of marriage. The honorees were Marshall and Johnnie Baker, James and Doris Loyd, Willie and Sharon Mayes, and Cecil and Lyda Mae Standridge.


Armstrong said that Gov. Bob Riley had declared February “Alabama Marriage Month” and asked each municipality to participate. In compliance with the governor’s wish, the town of Allgood chose to “honor residents who had been married continuously, without separation or divorce, for 50 or more years, and declare each of their wedding anniversary dates as a day to recognize them this year and each year there after.”

The mayor’s proclamation stated in part, “Whereas, that with joy and a sense
of tremendous honor and admiration, the
Town of Allgood Mayor, Council Members,

and Employees extend their heartfelt
celebration of this milestone to their children,

grandchildren and all other family
members.”

When asked, “What advice do you have to other couples to ensure a long marriage?” one honoree said, “Act deaf.” Another husband added, “Whatever she serves, eat it.” On a more serious note, Johnnie Baker said, “Just pet him and love him.”