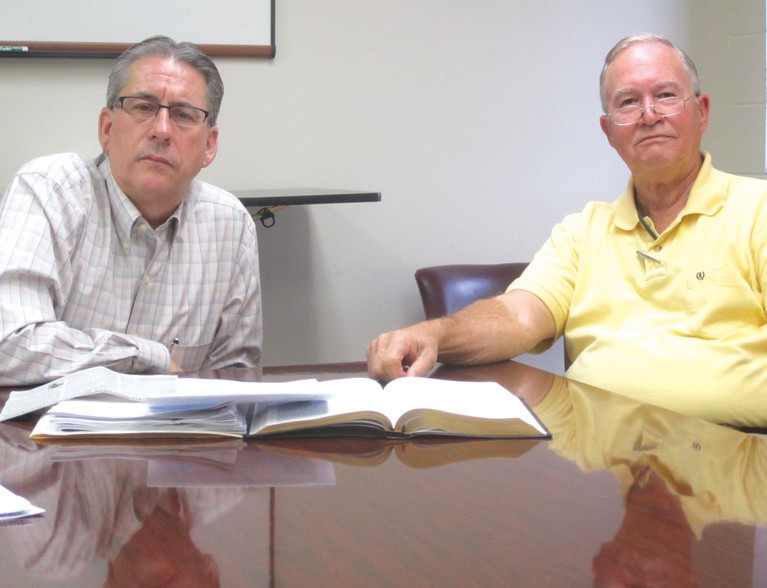 Larry Gipson (left) and Glenn Bynum: both evince a strong sense of responsibility to protect family and friends from ‘the evils of alcohol.’

Keep Blount County Special spokesmen Larry Gipson and Glenn Bynum – both intervenors in the lawsuit over the right of Blount County municipalities to hold a “wet/dry” referendum – announced last week they will appeal the ruling in that case to the Alabama Supreme Court. Both men are local Baptist preachers.

Blount County Circuit Court Judge Steven King ruled Nov. 1 that the portion of the law forbidding the referendum in only three out of 67 Alabama counties – including Blount – is unconstitutional. The ruling cleared the way for referenda to be conducted in five Blount County municipalities if and when the proper number of their citizens petition to do so.

A petition has already been collected and certified in Oneonta, but no date for a wet/dry referendum has been scheduled. Other qualifying municipalities are Blountsville, Cleveland, Locust Fork, and Hayden.

“Here’s what you came to hear. We’re filing an appeal. This case is going to the (Alabama) Supreme Court.” He added that the group’s lawyer, Eric Johnston of Birmingham, who handled the Blount County trial and will handle the appeal, had advised them it will take 12 to 18 months for the case to be scheduled and heard by the higher court.

Emphasizing that they were speaking for a “core group” of about 20 leaders of Keep Blount County Special and a constituency they estimated at several thousand in the county, both men said a major reason for appealing the case is their sense of personal responsibility to do everything possible to “protect our family and friends from the evils of alcohol.”

“We have the responsibility for getting the word out to people about God’s best plan for living their lives successfully and safely, and living them well,” Bynum said.

“When people say alcohol is already here,” Bynum added, “it’s not literally already here everywhere in Blount County, at least not the way some want it to be. The point is, the closer the places are where alcohol can be bought, the better chance underage kids have of getting it and getting started on the path to abusing it. It’ll be harder for them if the nearest places to buy it are in Birmingham or St. Clair or Etowah counties. If it’s just not right down the street at the corner store where they can get an older friend or unscrupulous store owner or clerk to get it for them – that’s the thing.”

Both men cited a number of Bible scriptures supporting their group’s position on drinking, along with facts and statistics on the social and economic ills caused by alcohol. These elements, they say, more than offset advantages of increased revenues associated with alcohol sales taxes. They also mentioned the Alabama Alcoholic Beverage Control Board’s recent campaign against underage drinking called “Under Age, Under Arrest” as an indication that even the agency that controls alcohol in the state has serious reservations about its social effects.