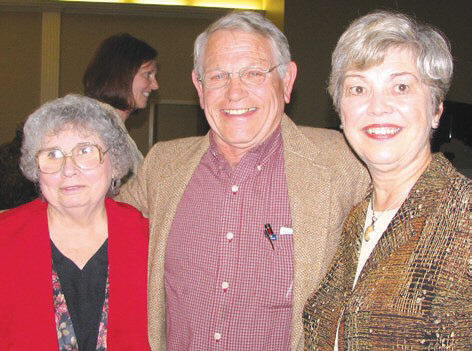 “For not with swords loud clashing, Nor roll of stirring drums; With deeds of love and mercy, The heavenly kingdom comes,” so Ruth Beaumont Cook introduces her book Guests Behind the Barbed Wire. That thought, from Ernest Warburton Shurtleff’s hymn “Lead On O King Eternal,” echoes throughout Cook’s work. 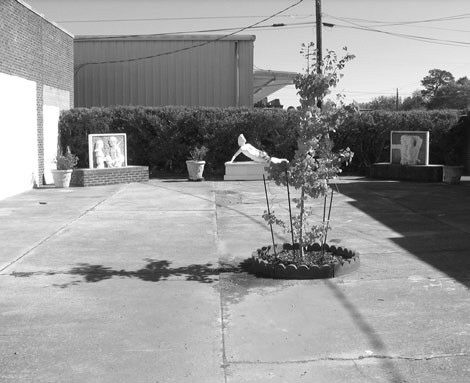 The ginkgo peace tree weocomes vititors to the Aliceville POW Museum and Cultural Center courtyard. Statues prepared by the POWs lie in the background.

The Ohio native and nearly 40-year Alabama resident offers insight into a fascinating but littleknown segment of Alabama’s and the nation’s World War II history. Cook spends over 550 pages sharing selected stories of Americans and Germans who lived in wartime Aliceville, Alabama.


As the site of the largest German prisoner of war camp in the United States, Aliceville and its residents came to be touched forever by that experience. The book highlights a few of the over 6,000 men interned in the west Alabama facility, including POWs, prison guards, and other officers who came to Aliceville, some of whom decided to make that their eventual home. Many area residents also found well-paying jobs at the camp. Three of the Germans profiled eventually returned to the United States and became American citizens; another’s German obituary proclaimed him an honorary citizen of Alabama; still others, their children and grandchildren have returned to Aliceville to commemorate the up to three year experience.

As Cook spoke recently at Cleveland’s First Baptist Church, she relayed the story of a daughter of one former POW. Addressing an Alabama reunion celebration, the woman noted that German POWs captured by Russian forces told of eating cockroaches to stay alive. Her father spoke of preparing doughnuts on Sunday afternoons in his Aliceville barrack’s kitchen.

The book shares from letters sent to Aliceville residents after the war and of granted requests for supplies forwarded to those who, at times, had taken arms against the givers’ homeland. Readers may hardly believe the generosity of a nation to its enemy combatants. The story somehow lifts one to a new appreciation of the nobility of a victorious nation in what the late Studs Terkel called “The [last] Good War.”

Cook, in her Cleveland presentation, spoke of the curiosity of Aliceville residents with the first arrival of the POWs. Juanita Prisock Beasley and her husband Marlin were with Cook at the Beta Chapter Delta Kappa Gamma sponsored book talk. Beasley recalled that as a ten year-old she and other residents had disobeyed military orders to remain in their homes on that June 1943 day. Both she and Cook claim the Americans were eager to see these Nazi “supermen,” most of whom were veterans of Erwin Rommel’s famed Duetsches Afrikakorps. Many of the POWs said the town’s people were there to see their horns. Cook contends most saw that day mere boys and felt sympathy for them.

She relates in her book that both the United States and Germany had signed the 1927 Geneva Prisoner of War accord. Under that agreement, POWs were to be treated as the capturing nation’s own soldiers. To the United States that meant, among other things, that POWs were to live in barracks as their own soldiers; they were to receive the same food as American soldiers; they were to have recreational opportunities; and they were to be paid for each day of incarceration and additionally for any work they performed. Swiss and Red Cross observers made regular visits to assure conditions met with the accord.

The POWs had leisure time. Many pursued artistic, educational, musical, writing, or sports interests. They created an orchestra, a dance band, a greenhouse, and a newspaper. Money saved through canteen purchases funded most of these leisure activities. Some bargained with their guards or civilian employees for artistic supplies in exchange for drawings or paintings. They decorated their barracks, planted shrubbery, designed gardens, carved outdoor sculptures, built an outdoor orchestra shell, and made of their 120-barrack compounds a home-awayfrom home.

Cook touches on the very different experiences of Aliceville area soldiers captured by the Germans and Japanese and of some who died in that fight. Many Americans know of Japan’s harsh treatment of all its prisoners. Neither Japan nor Russia had agreed to the Geneva accord. While Germany had signed, it did not adhere to the accord to the extent of the United States.

The Ohio State graduate contends that Americans had hoped word would reach Germany of their humane treatment of POWs. The thought was that Germany would reciprocate. There is no doubt Germany did not provide Americans with commensurate care. Some assert, however, that life for American POWS in German camps was immeasurably better than that for Russian POWs.

Idealistic Americans called for continued generosity toward the POWs. Cook includes a portion of a 1944 Collier’s magazine editorial as substantiation.

We ought to be humane and generous in this mater because we are Americans, and because we have always believed as a nation in decency, humanity, humaneness and a break for the underdog – which war prisoners certainly are. If we should take to mal-treating war prisoners, we would betray something fine in our national make-up; and the consequences of that betrayal would kick back in our own teeth.

The well-researched and documented tome includes some stories Germans shared of their homeland experiences while husbands and fathers remained behind American barbed wire. It places personal stories in their historical period, reviewing events leading to prison captures and progress of the war over the life of the camp. It also deals with conditions after the war and the long delay many German POWs suffered before being allowed to return to their homes.

With the war’s end, soldiers no longer qualified as POWs and found their lives changed. Officers no longer had the option of not working. America reduced food rations. Once most former POWs returned to Europe they found themselves forced to work in Great Britain, France, or elsewhere to help rebuild those war-torn nations for months or years before they were allowed to return home. Life became much less comfortable and pleasant than in their POW days.

In the late 1980s, Alabama Governor Guy Hunt issued a call for communities to make 1989 the year of “Come Home to Alabama.” Cook says that in years prior to that call, strangers would appear in Aliceville and inquire around in German accented English, “Vhere is dah camp?”

Aliceville residents took Hunt’s call to heart and invited their former “guests” to return to the onceagain sleepy town. With the help and encourage- ment of many in the United States and Germany, an official reunion for POWs, guards, and past and present residents came to fruition. Since that first occasion, others have followed. One Aliceville resident, who spent months in a German POW camp could not bring himself to share in the initial reunion. Eventually, he found the ability to meet with these former enemies.

Beyond the reunions, which have included at least one trip by some Americans to Germany, enthusiasm has grown for other commemorations. Some have lent or given prisoner-produced items they have held; POWs have donated copies of their newspapers; guards have shared of their newspapers; a former local soft-drink bottler donated its old plant; and now Aliceville has its own POW museum.

The United States government officially deactivated Camp Aliceville on Sept. 30, 1945. Governmental agencies or private individuals took possession of the camp buildings. The chimney for the enlisted men’s club and a surrounding sidewalk in a small town park are all that most can find of this once amazing experiment.

One can find, at the museum, a small gingko tree planted by five former POWs. One who had been for years a reconstructed Nazi now prays for peace. He and others planted that tree, the first type to blossom at Hiroshima after the atomic bomb blast there, with the words, “This tree we now plant at this place. Let it be a symbol of hope for a peaceful future.”

In her foreword, Cook reveals she spent time as a late teen as an exchange student in Germany. She found tremendous support there for America at the time. She recalls the tears Germans shed and their tremendous sympathy for America after 9/11. She writes with hope:

In January 2002, with the hunt for Osama bin Laden in full swing in Afghanistan,President Bush announced that captured members of Al Qaeda and the Taliban would not be protected by the Geneva Convention. He based his decision partly on advice from White House Counsel Alberto Gonzalez, who had concluded that these terrorists were not affiliated with a legal government and, therefore should not have rights or be considered military captives.

By that time, I’d read a great deal about the Geneva Convention standards followed with zeal by the United States during most of the World War II. I knew the very positive effects those standards had had on captives held in Camp Aliceville – the respect generated by simple things like hot coffee after a long journey; abundant meat and vegetables; adequate clothing and shelter; recreational, educational and spiritual opportunities – respect ongoing for a lifetime and now being shared with those captives children and grandchildren. I thought about the ginkgo tree former German POWs had planted in front of the Aliceville Museum as an expression of their profound belief in world peace.

The Oneonta Public Library has a copy of Cook’s work. Some locals recall experiences they had of German POW out of a satellite camp in Oneonta. Others have spoken of still another camp at Cleveland. While the Aliceville museum has no record of the Cleveland camp, a Birmingham News article written by a Birmingham Southern college student does list the Oneonta site. Cook does explain in her book that the state had, at least, four base camps and 20 satellite ones, with over 17,000 total prisoners.

The review above dwells much on the serious side and with long-range implications. Obviously, any reviewer must limit the scope of the summary; rest assured, however, the book does have many lighter moments. Readers will find themselves chuckling at tales of the lax attitudes on the part of guards, soldiers, camp employees, townspeople and the POWs. They will also find poignant stories of the interned, those associated with the interned, and the two killed in reported escape attempts.

The Aliceville POW Museum and Cultural Center displays many items from the camp. Guests may reach the reach the museum from the Aliceville exit off I-59-20 south of Tuscaloosa.