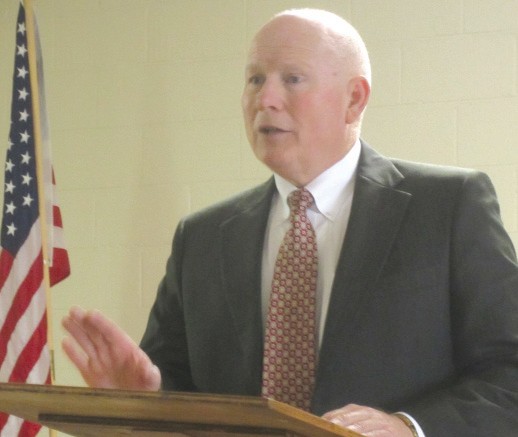 Alabama Department of Transporation director John Cooper addressed citzens in Hayden Friday at a morning meeting to report to them on the status of plans for Ala 160. Bottom line: the project is cancelled because of extreme state budget cuts.

“The bad news I’m sorry to bring you is that the plan to four-lane highway 160 has been cancelled. Current plans are not to widen it and not to include it in 10-year planning at this time. We’re faced with similar situations all across the state.”

With that announcement, and following an extending apology for forgetting to appear at a scheduled community meeting the night before, Alabama Department of Transportation (ALDOT) director John Cooper laid to rest nearly a decade of diligent praying, lobbying, and pleading by residents with highway and other state officials to four-lane the artery many of them thought of as a death trap.

By way of explanation, Cooper said ALDOT’s construction budget had been cut from $4 billion over five years to $1.5 billion over 10 years.

“We have about 20 two-lane roads that have a traffic count of more than 15,000 cars a day. We’re only working two of them. Ala 160 has a traffic count of about 8,000 to 9,000 a day. There are 50 or more other roads in that category,” he said. By those numbers, Cooper said, 160 can by no means be considered as one of the more seriously congested roads in the state.

That doesn’t even take into account the many miles of four-lane roads and interstates like I-65 in Jefferson and Shelby counties that are severely congested. He put highway 280 in Birmingham in a class by itself for congestion, cost, and problems of design and controversy.

“With what little money we have, we simply can’t afford to address two-lane roads at the traffic levels of 160,” he said

Answering residents’ comments about their perception of extraordinary safety hazards on 160, Cooper spoke plainly, seeming to try to avoid directly contradicting them: “This highway, like a lot of highways in Alabama, seems to have been laid out by following the path some mule took years ago. The safety of this highway is not significantly different from most of the twolane roads in the state. Congestion issues (on 160) are on the low side of normal,” he said.

He promised that ALDOT would address on an individual, small-project basis the most serious safety problems pointed out by residents and confirmed by ALDOT engineers. He designated ALDOT Division 1 engineer Johnny Harris of Guntersville as the contact point for residents to notify of such trouble-spot problems.

Speaking of ALDOT policy on right-of-way acquisition, Cooper summarized it this way (paraphrasing): If ALDOT has already made an offer to buy property, it will stand by that offer. If will acquire no more right-of-way and make no further offers. If a condemnation procedure is in progress over a piece of property, it will be the landowner’s option whether to continue that process to conclusion or not.

Further, buildings or outbuildings on acquired property will be dealt with “in the normal way.” Some will be advertised for sale and removed, while some will be kept. A majority will probably be removed, Cooper said. The property bought by the state will be held indefinitely. ALDOT will work with individuals according to its usual procedures to arrange access across state-owned property, he said.