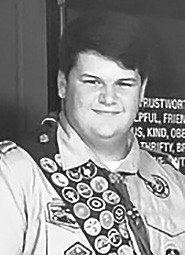 Earning what only 4 percent of all Boy Scouts do, Cameron B. Adams, Oneonta, achieved the highest rank of Eagle Scout in August 2019. Adams, 15, began his scouting career as a Tiger Cub with Pack 4053. He continued his cub scouting journey and achieved its highest award, the Arrow of Light.

For his Eagle Scout service project, Adams planned, coordinated, and constructed an arbor bench with landscape gravel as a base for the town of Highland Lake’s recreational area.

He received his Eagle badge during his Court of Honor ceremony on Nov. 3 at Anchors Church in Oneonta. After completing the requirements for Eagle rank, Adams also earned the Bronze, Silver, and Gold Eagle Palms.

As a member of Troop 4160 sponsored by First Baptist Church of Oneonta, Adams has held numerous leadership positions including quartermaster, patrol leader, and senior patrol leader. Throughout his career, he has earned 36 merit badges, the Cyber Chip, the National Outdoor Achievement Award for Camping, and attended the National Youth Leadership Training Conference. He was inducted into the Coosa Lodge of the Order of the Arrow, Scouting’s National Honor Society, and also earned the Brotherhood Membership in March 2019.

Adams, son of Denise Adams of Oneonta, is a sophomore at Oneonta High School. He is an active member of The Healing Place Church – St. Clair Campus where he serves in the media ministry and volunteers for their food bank program.

Adams and his family would like to thank all those who attended the Eagle Scout Court of Honor ceremony and to challenge him to use the skills his has learned as he continues to fulfill the Scout Oath by serving God, his country, others, and himself.