A woman who loves a good story 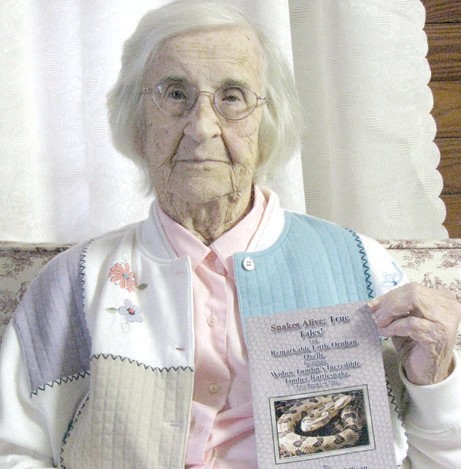 Many Blount Countians may know May “Granny” Millican for her gardening business in Garden City, but there is more to her than her love of flowers. She loves a good story, and her own is pretty good too.


Mrs. Millican was born in the town of Nectar, where her mother taught in one of the first schools in Blount County. Years later, May and her family moved to Garden City where she attended a oneroom school until the eighth grade. She was not able to continue her education since the nearest high school was not accessible to the residents of Garden City. Then, it was not uncommon for children to work and not attend school. In fact, in the United States, between 1910 and 1919, only one-third enrolled in elementary school and less than 10 percent graduated from high school.

May’s education obstacles never slowed her passion for writing. She continued her education through self-teaching, reading, and writing. In the ’50s, Mrs. Millican was a reporter for both the Daffodil Club and the Blount County Home Demonstration Club, sending off reports and updates to local papers such as The Southern
Democrat.
These clubs were organized after Congress passed the Smith-Lever Act on May 8, 1914, through which state and local governments worked to teach the latest agricultural technology and home economics to women and girls.

Since those days of club reporting, she has remained the creative storyteller among her family and friends. According to her daughter, Betty Sue Grigsby, she used to lull her grandchildren to sleep with her fictional opossum tales and adventures. “The children finally persuaded Granny to write down these stories and even corrected her when she told the story incorrectly,” she laughed. “Also, when she had her gardening business, she made so many friends and loved to share her stories as well as listen to their stories of animal encounters,” says Grigsby.

After raising her two children and managing a successful gardening business, May Millican discovered a love of creative writing, which she has never lost. Her desire to start writing short stories surfaced five years ago, when she wrote of a heroic family dog, Bama, who put herself in harm’s way to protect May’s granddaughters from a rattlesnake.

After reading Bama, Delton Blalock, friend and editor of The Cullman Tribune,
asked her why she didn’t write more stories and if she would share her stories weekly in The Cullman
Tribune.
At the age of 94, she agreed to give it a try. Nearly six years later, she still writes for the paper and has written her first book, titled Snakes Alive: True Tales!
and Remarkable Little Orphan Ovelle
including Widow Tumlin’s Incredible
Timber Rattlesnake
(Two Books in One) and has finished her second book which will be out the beginning of next year. It’s titled Real Snakes, Real People: Snake
Times
and Raccoon Wranglers
(Two Books in One). “My first book came out in 2008. I was 98 years old,” she says proudly.

Why write about snakes? I asked. She had her own meeting with two of the most poisonous snakes in our area: cottonmouth and copperhead.

Storyteller May “Granny” Millican’s twilight years are now spent in her quiet Garden City home writing her favorite short stories, and she wouldn’t have it any other way. Just months away from her 100th birthday, May continues to conduct interviews, handwrites her stories onto loose-leaf paper while her daughter “takes the bugs out,” and enters her work into a living document. Even though she is confined to her quiet abode, she is surrounded by her two lifelong loves: family and writing.

“Her mind is still active at age 99 years,” says her daughter. “Her writing and personal interaction have helped mother stay mentally alert. Mother has worked so hard on her books and we are so proud she saw the fruition of her first book. I hope she will also see the fruition of her second book as well,” she continues.

In the last couple years, May’s snake stories have entertained hundreds of readers all across Blount and Cullman counties. It’s these stories that have brought generations of her family together and fulfilled her passion for writing at the same time. With her 100th birthday on April 24 approaching, May said she’s had a charmed life. “When you’re doing something you enjoy, time stands still,” she said.

If you are interested in purchasing one
of Mrs. Millican’s books you may send a
request at snaketimes@yahoo.com or
send $15 along with your forwarding
address to: Snake Times, LLC, 1431
Jenkins Road, Hayden, AL 35079.