A Silent Crisis gets noisier 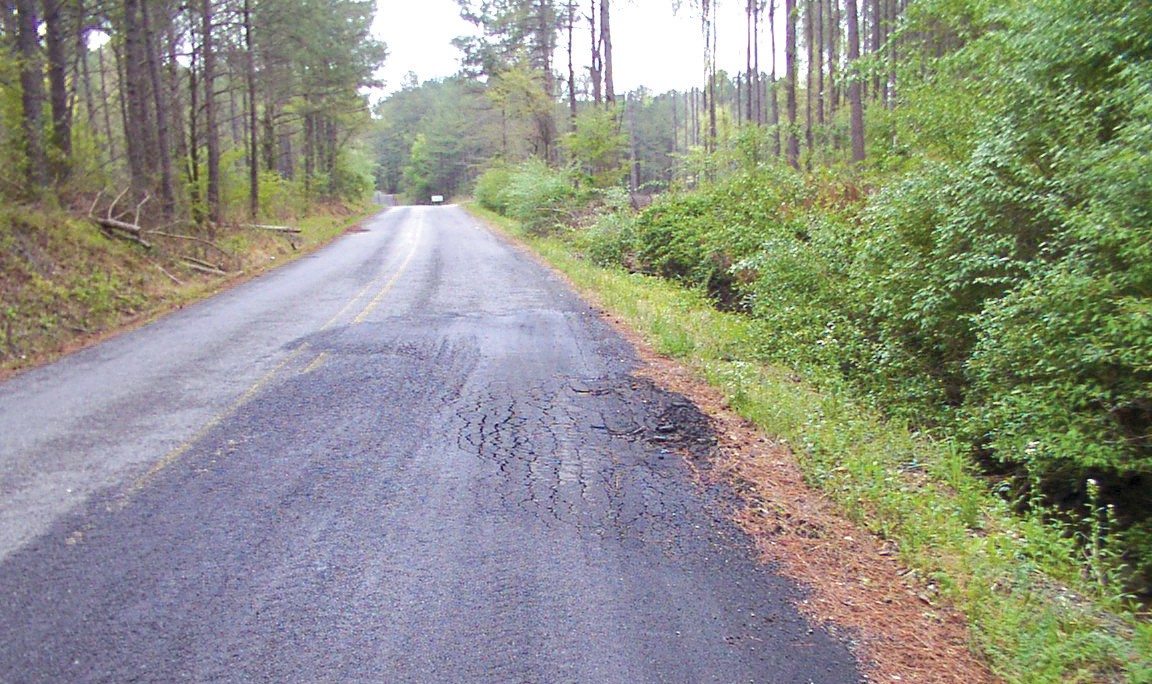 Part of the problem. This stretch of heavily traveled commuter road in District 1 is under assault by an enemy of county roads: logging trucks. One loaded truck weighs 80,000 pounds. The wear it creates on the road is equivalent to 1000 passenger cars. (Don’t divide 80,000 by 1000 to check the math – it doesn’t work that way.) Two log trucks making five trips a day over this road subject it to the amount of wear of 10,000 cars. Plus, wherever log trucks enter the road from an off-road loading area, mayhem occurs – on road surfaces and disrupted drainage from damaged ditches. Commissioners fight a running battle with loggers to minimize damage to taxpayer-maintained county roads.

A Silent Crisis is a publication that says Alabama roads and bridges have been allowed to deteriorate so long and so far that they have now reached crisis conditions. That means the only option to restore them now “is to take steps that are much more expensive and less efficient than maintenance programs which could have been employed decades ago.”

The booklet is issued by the Association of County Engineers of Alabama, with the cooperation of the Alabama Department of Transportation and 64 of the state’s 67 counties. Those people should know their roads.

Other quotes from the publication:

An initiative “unlike any the state has seen” is needed to address the problem. “The mantra of cutting costs and doing business smarter will not solve this problem alone. The magnitude of the issue has been ignored for far too long… A creative and collaborative solution must be found to address this issue, but it is paramount that the public and elected officials alike understand what ignoring this issue will mean to them.”

At right are figures taken from the publication and from Blount County’s road and highway budgets for fiscal years 2008 to 2011. The comparisons further illustrate the problem.

Note the estimated 2008-2011 shortfall of more than $12 million. Whether this purely mathematical estimate is literally accurate, it confirms the perception of commissioners and the county engineer that the county is losing ground big time from one year to the next in its attempt to keep up with road deterioration.

That’s old news to old commissioners, but you can still see the look of shock on the faces of the new ones and hear it in the note of quiet desperation in their voices when they say, “There just isn’t enough money to keep the roads up. The people don’t realize what we’re up against, and they don’t want to hear what they think are excuses. But there’s just not enough money – not anywhere near enough money – to do what needs to be done, and they don’t believe it – or don’t want to believe it. And there’s no relief in sight.”

As excellent as A Silent Crisis is in dramatizing the problem, it offers no solutions. The reason, according to county engineer Richard Spraggins, is that county engineers have not developed a proposal of sufficent magnitude to solve the problem, nor developed the political wherewithal to propel such a proposal first before the Legislature then before the people of Alabama with compelling arguments.

While consensus has not emerged, there are some ideas “out there” Spraggins says. In a future article on this subject, The Blount Countian, with Spraggins’s help, will follow up to look at some of the ideas on the horizon.