A Road Trip to the End of the Earth

(or at least the southernmost tip of the lower 48) 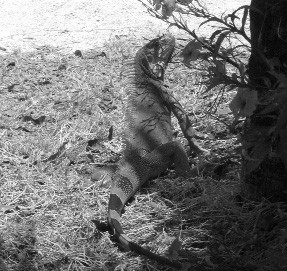 Encounters with wildlife were common during the road trip.

When Keith Burke and Amy Bailey decided to go somewhere this summer, they didn’t take a vacation; they took a road trip. A vacation – planned with attention to details – where, when, how, is what most people do. A road trip, however, evokes dreams of wide open spaces, the wind in your hair, the spontaneity of going where you want, when you want, and to heck with the details!

So, a road trip it would be. Drive through Florida, pop in at the Burke family reunion in Melbourne, then, while practically in the neighborhood, drive the 350 miles and visit Key West. Sounds like fun!

Then it got interesting.

Keith dusted off his 1971 Toyota Land Cruiser with well over 250,000 miles and tuned ‘er up. Keith, by trade a Cahaba Valley firefighter and quite a handy mechanic, had no problem driving a vehicle the average person would consider less than reliable. Amy, a nurse, was game and went along for the ride. The Cruiser’s luxurious amenities? Air-conditioning (no doors), retractable sunroof (a small tarp up top), GPS (nope), satellite radio (conversation), custom paint job (rust spots and holes)– yep, the perfect setup for a road trip. 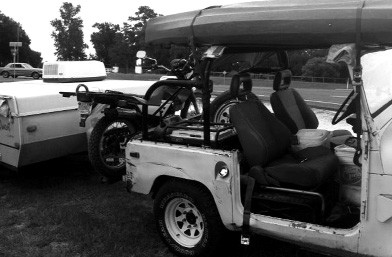 They decided to tow a popup camper. Camp all the way down and back. Ready? No, not yet. A motorcycle would be fun to zip around on during their stops, so out came the Yamaha 225. Motor bike mounted on the back of the Cruiser, popup hitched, they were nearly ready to go. Avid kayakers, they couldn’t quite bring themselves to leave their kayaks at home while around all that water. Kayaks secured on top of the Cruiser, motorcycle mounted in back, popup hitched, fishing poles and bags loaded, they headed south. “Mile marker zero, here we come!” They drove to Tallahassee, Fla., and continued over and down the eastern shore of Florida.

The end of the road.

While near Melbourne, they witnessed a female sea turtle leave her protected nest and make the arduous journey from the beach back to the surf. “It was amazing,” says Amy.

Keith’s brother Kevin and Kevin’s daughter Cheyenne also took the trip albeit by another route, and different (read: dependable) transportation. The group met up in Key West, spending five days together before Amy and Keith began the return trip.

The duo took their time, taking back roads whenever possible, stopping to see unusual sights as they felt like it. They drove across famed “Alligator Alley” and camped there one night – only one night because of the very real things that go bump in the night. Did they see alligators? “Everywhere!” they laughed. Sanibel Island was a favorite stop, and a few days enjoying the beach restored their spirit for the remainder of the drive up the western coast of the state. While kayaking in Crystal River, a group of about a dozen manatees joined them, jostling the kayaks and investigating the two until the manatees decided they weren’t going to get fed and meandered on their way.

How was the weather? Mostly hot and humid. A few hours in a Florida thunderstorm with the Cruiser’s “air conditioning” will test even the hardiest of spirits, but they didn’t have any complaints. “We knew it would be hot and we would probably get rain a few times during the trip,” Amy said. “No real surprises there.”

Getting unusual glances and double takes from other travelers became commonplace after about the second day of travel, and by day 17, they had lost count of the times people asked them where they were from and how far they were driving that – meaning the cruiser/ motorcycle/ popup/kayak ensemble – even taking their pictures at a few campsites.

“Funny thing is, a few of my friends were kind of disappointed – disappointed that I didn’t call, begging them to come and get us!” Keith laughs. “We had faith in the Cruiser all along,” he continues, resulting in a sideways glance from Amy.

With more than 3000 miles logged on this trip, what’s next for Keith, Amy, and the Cruiser? “Maine,” the two say in unison. “We went to mile-marker zero in Key West, so the next logical trip is to the end of that road, 2390 miles north in Fort Kent, Maine.”