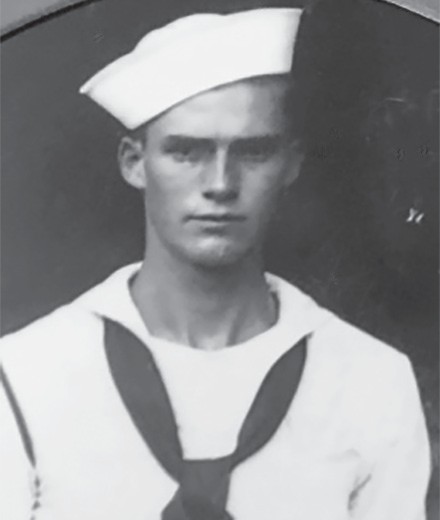 It could be said that Ruben “Chuck” Woodley, a poet and former longtime resident of Nectar, has led a remarkable life, although a line from one of his poems would make you think he might demur. “That’s what happens when you get old. We have lots of stories that’ve never been told.”

Chuck and his wife Ann (originally from Hayden) have gathered a lot of stories both told and untold. One story readers may remember from a 2009 article in The Blount Countian is how the two met after World War II when both were working at Sears in Birmingham. In his verse, “I peeped over the candy counter and said boo. She raised up and said boo to you.” They have now been married for 73 years and still counting.

Prior to that encounter, Seaman 1st Class Woodley served 22 months in the U.S. Navy during World War II, most of it in the Subic Bay area of the Philippines aboard the USS Anthedon, a submarine tender. He was a gunner manning a 20mm gun.

Ruben tells the story of how Tokyo Rose, an English-speaking radio propogandist for the Japanese, broadcast a prediction that the U.S. Navy was “bottled up (in Subic Bay) and would never get out.” She was wrong, he said. He also recalled that one year as he and other crewmembers were sitting down to a Thanksgiving meal, “We were attacked by zeros (Japanese planes).”

Chuck published a collection of his poems titled Home Grown in 2014. He has been writing poetry since high school, jotting down verse about most anything.

Chuck celebrated his 93rd birthday a couple of weeks ago in Florida where he and Ann live now. He is still enjoying life, writing poetry, and thankful for every day. “But family and friends we’ll never forget. Through God’s grace, we’re not done yet.” Remarkable.