A problem which ‘thrives in secrecy’ 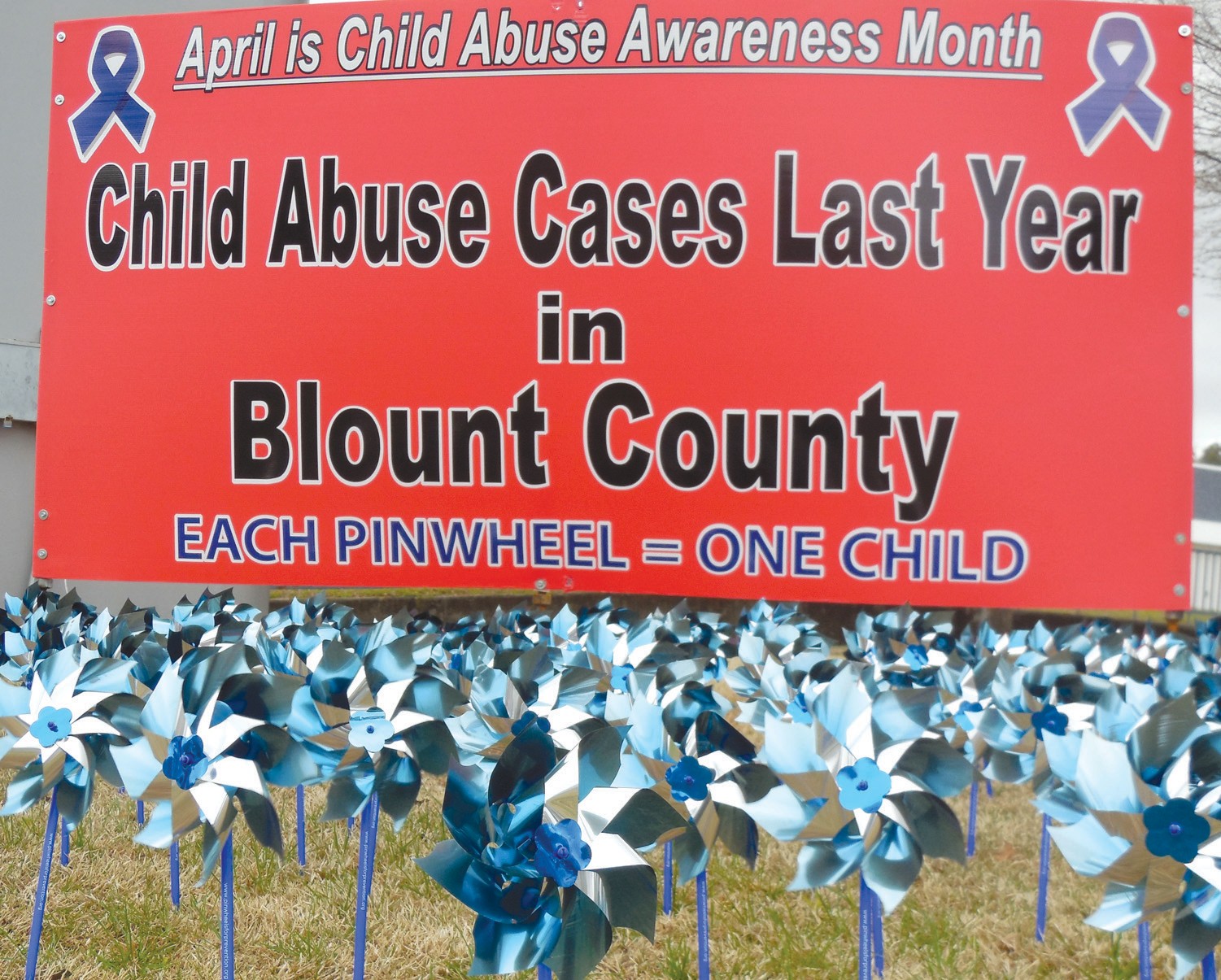 Contrary to what Hollywood would lead people to believe, a child abuser is not always the scary, rusty-van driving, bearded man lurking in the darkened corner of the alleyway.

They are cousins, neighbors, dads, mom’s boyfriends, dad’s girlfriends, coaches, and other seemingly wellmeaning members of society. These are people who earn the child’s trust and over time begin to push the boundaries until a line is crossed. The child may not even realize something is wrong, and if they do, are told to keep it a secret.

In 2013, 135 new child abuse cases were investigated by the Blount County Children’s Center, according to executive director Jim Ed Clayton. Of those 135, none of the abusers were someone the child wasn’t already acquainted with.

Astonishingly, according to statistics provided by the center, experts say the number of cases reported barely scratches the surface of what might be occurring behind closed doors.

“Experts estimate that only one out of 10 abused children ever tell,” Clayton said. “One of our main goals at the Children’s Center is to spread awareness of this problem because child abuse thrives in secrecy.”

Not only is the center relentlessly attempting to help the community understand the child abuse problem in this county, but nationally the month of April, Child Abuse Prevention month, is dedicated to doing the same thing. Be a hero – stop child abuse

During the month of April, the Children’s Center will be doing its part to bring awareness to the community. On April 29 at 6 p.m., the Blue Ribbon Dinner, blue is the child abuse awareness color, sponsored by Hometown Bank will be at World Outreach Center. Individuals can purchase a plate for $32 or a table of eight for $250. The entertainment will include performances by bluegrass group Flying Jenny, humorous tales told by Dolores Hydock, and prize drawings such as a one-night stay at Ross Bridge Resort & Spa, 14-carat yellow gold floating opal necklace and earrings, a six-month membership at The Gym, and many more. For reservations, phone 274-7226.

Additionally, the center began its annual awareness campaign weeks ago in area schools. Kindergartners through sixth-graders in Oneonta and Blount County schools were asked to enter the Blount County Prevent Child Abuse Poster Contest. Each student was given the chance to create a poster signifying how to “Be a Hero – Stop Child Abuse.” Students responded and the center received 224 posters.

Contest winners, along with their families, will be recognized during a reception. They will be honored by local officials and receive prizes – a $50 gift card grand prize and a $20 gift card for first place in each grade.

The students’ work will also be displayed at the Blount County Courthouse in recognition of Child Abuse Prevention Month.

The Children’s Center also offers the public a visual representation of the child abuse cases affecting the county. In front of Cadence Bank in Oneonta, 135 pinwheels exemplify each of the new cases filed last year.

But, it takes more than just a month of recognition to really solve the child abuse awareness problem, Clayton says, and that’s what the Children’s Center is meant for. The Blount County Children’s Center

It’s not a daycare, or a children’s home, although the name might cause some to believe that. Instead it is a child-advocacy center serving abused children and their families.

“The center is a child-friendly place where all related agencies come together to hear a child’s abuse story but without the interrogation by multiple people,” Clayton said. “The child is interviewed by one person while the interview is watched on closed-circuit television in another room by representatives from several community agencies, including DHR, county and city law enforcement officials, the district attorney, juvenile probation officers, and medical and mental health officials.”

The first Children’s Center began in Huntsville. In 1984, a 10-year-old girl took a stand and told a teacher she was being abused. However, without any standard of rules in place to deal with the situation, the child was forced to tell the embarrassing story multiple times to numerous people – the teacher, then the principal, then the police, then DHR, then the district attorney, and then in court.

“It was traumatizing for the child to tell it to one person, much less that number of people,” Clayton says. “The district attorney at the time, Bud Cramer, who went on to become a U.S. Congressman, was approached by the grandmother after the trial, and she said that having her granddaughter retelling the story so many times did more damage than anything. After he heard this, he got everyone together and asked, ‘How do we do this better?,’ and so the child-advocacy center idea was born.”

“An interview is not necessarily for healing purposes, the therapist is there for that, we are put in that situation to get the who, what, when, where, and why and do so within a goal-time of 20 minutes,” Ashworth says. “So, you go in with a child you don’t know, make them comfortable, befriend them, and then ask them to tell you one of the most personal things that has ever happened to them.”

Since her first days working with the Blount County Sheriff’s Department 16 years ago, Ashworth says she has seen a change in the child abuse problem in the county, but not necessarily the amount of cases.

“I think we’ve become more aware and when people see a possible child abuse case they know they need to report it.” she says. “I think as professionals we’ve become a lot sharper at understanding what we need to do to expose the people that are hurting kids. The teamwork aspect has definitely morphed since I first started working here. Sitting down in a team meeting, you see conversation among many professions including medical officials, prosecutors, educators, and it’s amazing how we work together during every case. We work as well here as any group does in the state.”

Another important element of the center is the professional therapy after the ordeal is over. Therapist Ellen Shelnutt counsels the children and the non-offending parent or guardian on how to cope after the trauma. Last year, she spent approximately 1200 hours with 247 clients. This service is provided at no charge to the families.

“We give people perspective,” said Michelle Sargent, family advocate at the center. “I had a mom of one of the abused children say to me, ‘Her life is ruined,’ and that’s just not true. Her life wasn’t ruined. We have to show them that life is still worth living.”

Clayton says it is a one-step-at-a-time process for those affected.

“We see a lot of parents and/or guardians on the very worst day of their lives,” he says. “But, life goes on and the day after they come here the abuse may be the first thing on their mind, but months down the road it might be the second thing on their mind when they wake up, and years later it will be something that happened but doesn’t have a strong hold on them any more. It’s about putting the pieces back together.” How do I help?

Clayton says the first thing many people want to do is volunteer at the center, but with the confidentiality of the cases, it’s just not possible. Instead, Clayton encourages people to spread awareness and write a check to the center. The nonprofit organization’s state, federal, and local funds are dwindling, and Clayton says they are becoming more and more dependent on churches, businesses, social clubs, and individuals to keep the center up and running.

Even with that kind of help coming to the center, Clayton says one of the most important actions someone can take to help is focusing on prevention because this can happen to someone you know.

“Pay special attention to groups that are youth serving,” he says. “In small churches, for example we sometimes welcome anyone who volunteer with the children’s or youth ministry without taking proper safety precautions, but safety measures need to be put in place for both the teacher and the student. Background checks need to be carried out, no adult should be alone with a child, and doors should always have windows. In youth sports, it’s so easy for the coach to say, ‘Oh yeah, I’ll bring Johnny home from practice,’ but that’s not good for either party because that is setting the child up for potential abuse or the child could claim the coach did something he or she didn’t do. No matter what organization you are involved with, if children are part of it, you need to have policies in place.”

In the 21st-century a new type of predator has made his/her way into the lives of children and teenagers.

Call DHR, says Clayton. The center also teaches students to think of five trusted people to tell if they know one of their friends have told them about abuse.

“Once a child does tell someone, sometimes that person doesn’t believe them or doesn’t know what to do, so nothing gets reported,” Clayton says. “We teach children to use those five trusted people because surely one of them will listen. If nothing happens, keep telling.”

Clayton does warn that if DHR is contacted, do not expect to hear a call back.

“It’s private,” he says. “The most you’ll get is a thank you, and then they will investigate the case.”

The center is also reaching out to those who don’t speak English, and are encouraging them to spread awareness. With the recent addition of Spanishspeaking employee Aleyda Villegas, more of the Hispanic population is also learning about the Children’s Center.

“We have more than 8000 Hispanics living in Blount County right now,and their children deserve to be protected,” Clayton said. “Since Aleyda began working here the response from Hispanic families have increased, and we are proud we are now making that effort.” ‘It’s everyone’s responsibility’

Clayton stresses that everyone in the community must take responsibility for the safety of our children.

“It’s easy to look away and say ‘I don’t have proof of anything,’ or ‘I don’t want to get anyone in trouble,’ but someone has to take the initiative for that child who might be being abused. We should all feel responsible.”

Additionally, even though April is a month set aside to bring awareness to the child abuse problem, it shouldn’t be the only time it crosses our minds.

“You need to report in December and every other month,” Clayton says. “We should be diligent watchers throughout the entire year.”