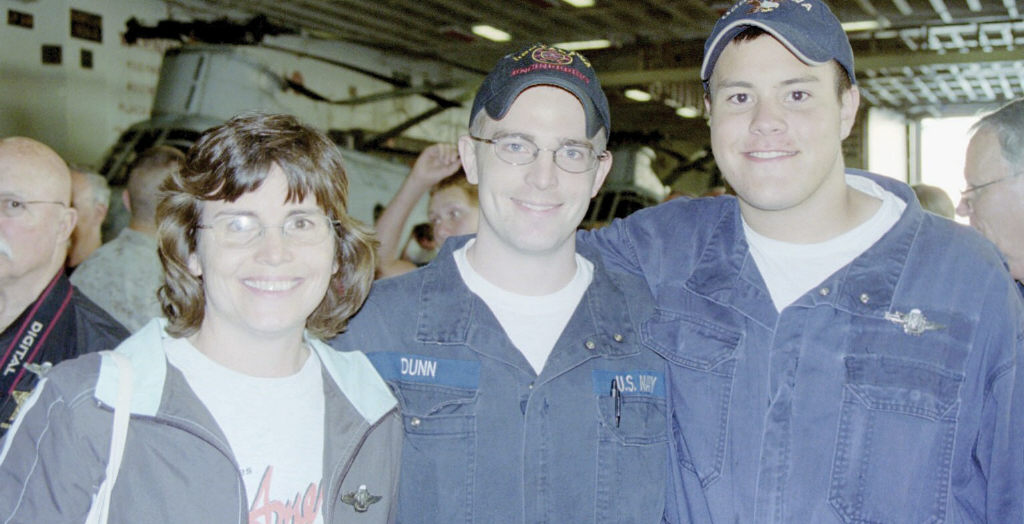 Above: Lori Criswell and sons Bradley (center) and Will aboard USS Tarawa; below,Will in pre-flight.

Lori Criswell got to spend some quality time with her oldest son Bradley this summer. The fact that he is in the Navy just meant that she had to jump through a few hoops to do it.

Bradley Dunn, the son of Lori Criswell and Dennis Dunn, is stationed on the USS Tarawa, an amphibious assault ship. The ship holds approximately 700 naval personnel and can transport up to 2500 marines and their equipment. The Tarawa has a well deck that can be flooded to allow amphibious landing craft to enter the ship to load and unload. It also has four fully equipped surgery rooms and a large triage area for treatment of wounded during battle or rescue operations. 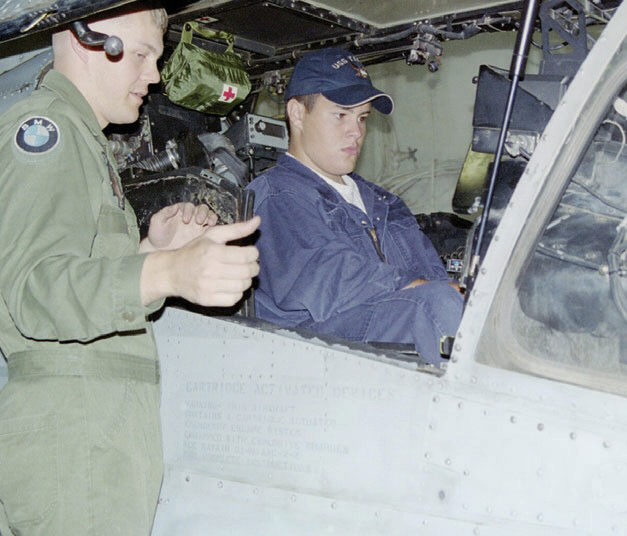 Bradley was assigned to the Tarawa after a 10- month stint in the Navy’s nuclear program followed by a tour of duty aboard aircraft carrier John F. Kennedy.


He was assigned to the Tarawa in July 2007 and did not see his family for almost a year before meeting Lori and younger brother Will Criswell in May of this year in Hawaii.

Lori and Will traveled to Pearl Harbor on May 25 and reunited with Bradley the next day. After an emotional tour of the USS Arizona Memorial, Bradley decided that a trip to McDonald’s was in order.

Lori and Will got to spend time with Bradley over the next few days by literally walking in his shoes. Will shared a berth with Bradley while Lori was assigned to separate accommodations with female Navy personnel.

The Tarawa returned to the continental U.S. in a three-ship convoy with the USS Georgetown and the USS Cleveland. The trip from Pearl Harbor to San Diego was probably routine for the sailors onboard but not for the two invited stowaways.

Over the next few days, Lori and Will got to experience life on the sea. Each got to sit in the pilot’s seat of an attack helicopter, tour the ship’s many compartments, and see how the ship is refueled by a tanker on the open ocean.

Bradley works far below deck, in the hold of the ship where it takes in steam water to run the turbines that power the ship. It’s a dangerous area so access is limited but Bradley was allowed to give his guests a short tour.

“It’s about 120 degrees down there,” said Lori. “His body is so accustomed to it that he freezes in the regular parts of the ship now.”

The Tarawa arrived off Camp Pendleton, near San Diego, on June 2 and began the process of offloading the 2500 marines and their equipment.

After the marines departed, the Tarawa cruised 38 miles south to San Diego and received an escort into the harbor from several naval vessels to keep civilian ships at a safe distance.

“When we entered the harbor,” said Lori, “all the Navy men lined the rails in their dress whites and it was a sight to see. When I see him (in his dress uniform), I’m just so proud. I’ve seen the homecomings on TV but this was different since I got to see it up close and I just cried the whole time.

“We were awarded our service pins and a certificate. To me, this was the trip of a lifetime.”

The Tarawa has another cruise to Panama coming up but Bradley is scheduled to visit his family this month. He especially appreciates the care packages that he has received from Denise Smallwood’s class at Blountsville Elementary and Alethea Bailey’s Sunday school class.