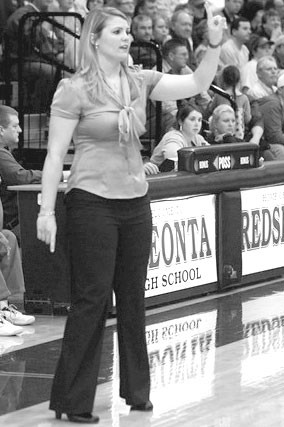 Oneonta head coach Amber Deline has led the Lady Redskins to a 33-0 record.

Anniston comes into the regional as the favorite – at least according to folks around Anniston. The Lady Bulldogs’ only blemish on the season was a 64-57 loss at Jacksonville on Jan. 12

Anniston won the other three games against the Lady Golden Eagles.

Huguley is a deadly shooter with enough athletic ability to get her own shot or take the ball to the basket.

Bolton is hard to handle on the inside. Since she became eligible in the middle of the year, the Lady Bulldogs are undefeated. Bolton has given Anniston a legitimate presence in the paint and her rebounding and defense have been the difference in several games. 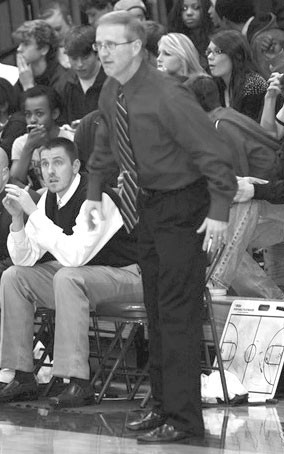 Neal Wester has led the Oneonta Redskins to a 25-5 record and a third straight berth in the Northeast Regional.

Oneonta comes into the regional with a big bull’seye. When you go 33-0 on the season, other teams tend to notice.

The Lady Redskins were able to play through a bit of a funk late in the season before winning the 4A Area 12 Tournament.

Oneonta may have struggled a bit late in the season – at least as much as a 33-0 team can struggle – but the Lady Redskins are coming off a 43-23 blasting of Guntersville in the sub-region.

Destiney Elliott (5’10, So) will give any defense problems. Her ability to handle the ball coupled with her athleticism and shooting ability give the Lady Redskins something that most teams don’t have.

The loss of Charlsie Coefield at midseason has been tough but Abby Blackwood, Maddie Boyd, Dimonique Sanders, and Baylee Gibbs have all stepped up at various times to help carry this team.

If Oneonta shoots the ball well at Jacksonville, the Lady Redskins can win the Northeast Regional.

The Northeast Regional features the No. 2 (Oneonta), No. 3 (Anniston), and No. 5 ( Jacksonville) teams in the state, according to the final rankings of Alabama Sports Writers Association.

Springville is the only team not ranked and the Lady Tigers are coming off a 57-54 win at ninth-ranked DAR in the sub-region.

Jacksonville features Lacey Buchanan, one of the best pure point guards in the state. Listed at just 5’1 and 100 pounds, she relies on speed and quickness and is an absolute nightmare of a match-up for most teams. Buchanon has developed into a good shooter and she can score when she has to.

Jacksonville’s leading scorer is 6’1 junior forward Sharon Osterbind. She also leads the team in rebounding and does a lot of the dirty work on the inside, along with 5’10 junior Kenyatta Ervin.

Springville head coach Warren House’s team will battle, no matter who the opponent is. The Lady Tigers play as a team – they have been led in scoring by seven different players at times this year.

Molly Lindsey (5’7, Sr) is the Lady Tigers most consistent threat but tremendously athletic forward Ashley Shaw (5’9, Sr) may be the team’s most important player. Shaw can, and probably will, guard almost anyone on the floor and her ability to score around the rim will help to balance a Springville attack that can be very guard-oriented.

The boys side of the 4A Northeast Region doesn’t have the star power of the girls – none of the four teams were ranked at the end of the regular season – but these teams are capable of playing with any team in Class 4A.

The Tigers are not very big with just two post players listed at 6’3 but almost every player that Childersburg head coach Al Barnett will put on the floor can shoot the 3.

Teams with size have given the Tigers trouble.

Guntersville returns to the Northeast Regional for the 10th time overall and third time in the last four years.

Guntersville has a legitimate big man in the middle with 6’6 senior Matthew Bass. He has carried the Wildcats at times and is coming off back-to-back monster games – 29 points against DAR in the Area 14 finals and 25 points against Springville in the sub-region.

Guntersville has relied on Bass to carry the offense at times so the Wildcats might need other players to step up this week at Jacksonville.

Munford comes into the regional with the worst record of any team that is still playing. Not just in the regional but in the state. Only the Gaston boys (11-15) and Midfield boys (10-21) have losing records and Midfield actually had to forfeit 10 wins (including one each to Oneonta and Childersburg) because of the use of ineligible players.

Munford gave Oneonta all they could handle in the first round last year at Jacksonville but the Lions graduated the core of that team.

The Lions are an athletic team that will look to use their speed and quickness to make up for a lack of size. Jacksonville outrebounded Munford 38-17 but the Lions came up with 11 steals and hit seven 3-pointers.

Oneonta comes into the region on a roll and the Redskins are coming off perhaps their most complete performance of the year – an 80-49 thrashing of DAR in last week’s sub-region.

The Redskins are capable of pounding undersized teams in the paint with Stedman Bothwell (6’3, 235 Jr), Jalen Johnson (6’3, 200 So), and Schyler Walker (6’3, 210 Sr). However, it is the Oneonta guards – Keenan Warren, Ryne Wester, Austin Owens, and James Russell – that make the Redskins go.

Warren, especially, has the ability to take over a game but Owens, Wester, and Russell can cause a ton of problems for opposing defenses.

The Oneonta defense often gets overlooked but the Redskins threw up a brick wall against DAR – the defense of Owens and Russell on DAR point guard Aaron Troup would have made John Wooden proud.

This is a veteran Redskin team – Warren and Wester are the starting guards on the third straight Oneonta team to make the regionals at Jacksonville State – and that experience could be the difference this year.