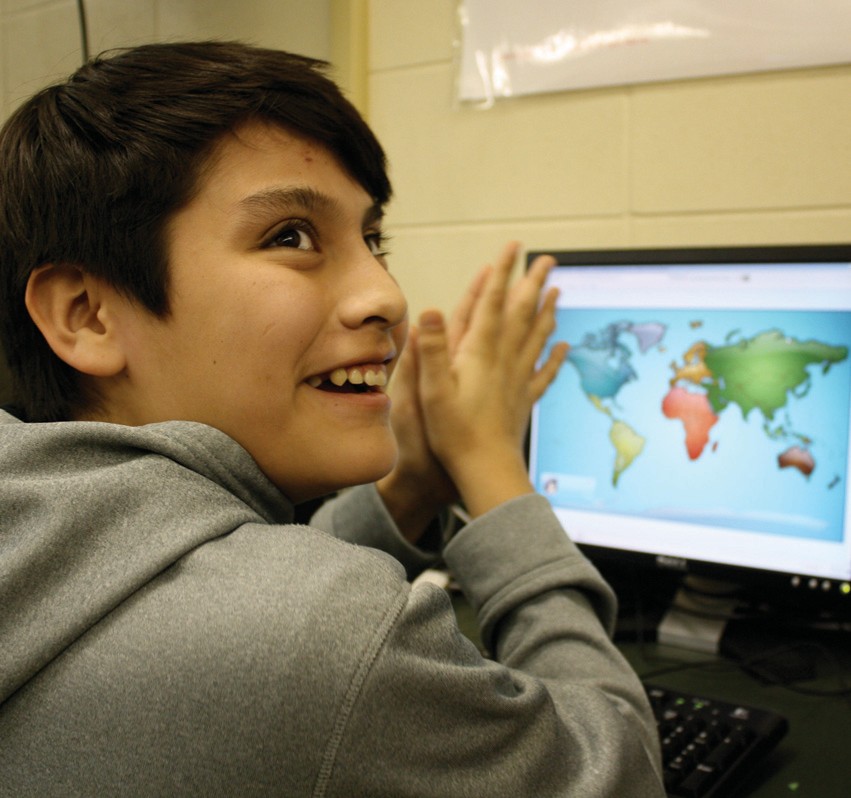 Answering questions in literal split seconds has become muscle memory for Arturo Rico. For one minute, his eyes almost never leave the computer screen as his fingers quickly tap correct answers. In the last few seconds, he edges out his competitors for first place and answers 70 questions correctly.

He didn’t beat his highest score of 74 correct questions in 60 seconds, but he’ll settle for first place.

Rico isn’t the only student clicking the keyboard in Cathy Holley’s Cleveland Elementary sixth-grade math class – every student is hunkered over with determination as they battle individuals in their age group from all across the globe.

“Got it,” Michael Pepper replies.

Pepper visits Holley’s class often offering different technological insights for the class to ponder. This time, the AMSTI employee is adding a whole new perspective to World Math Day by helping the students with geography.

While the students are busy answering mathematical questions quicker than their foreign competitors, Pepper has a display of all the different countries the students are competing against – Luxembourg, Finland, Honduras, Columbia, Botswana, Qatar, and the list goes on.

Not only is Pepper showcasing where the students’ competitors are from, but he’s also informing them about different time zones. While the Cleveland students are competing at 10 a.m., they are surprised to hear Pepper say it’s now 9 p.m. where one of their competitors is located.

Five years ago, Holley received a postcard inviting her and her students to participate in a worldwide-online competition among public schools, private schools, and individuals.

She jumped at the opportunity, and since then, her sixth-grade classes have competed.

Participants are sorted into their age group – 11-to 13-year-olds for her sixth-grade classes – and then they begin practicing.

Even though practice doesn’t count, the students were still excited when they made the Top 100 classes in the world for their number of correct answers during the practice competition.

The questions aren’t extensive Pythagorean-theorem type problems. It’s all basic material, however, Holley teaches her students mental math to help them prepare. No paper, pencils, calculators, or any other helpful instrument is used during the competition. It’s all in the students’ minds. Holley has taught the students about breaking down numbers, so the only instrument needed is the brain.

“They’ll come up to me and say, ‘We get to have World Math Day with you, right?’” Holley says. “It has ignited. Kids who don’t usually enjoy math, enjoy this because all kids like that competition element.”

Holley says her favorite part about World Math Day is going home and seeing her students still logged in and competing. She says in previous years she has seen her students battling til 11 p.m.

It takes a while for the students’ results to be calculated and returned to see if they managed to make it into the Top 100 during the actual competition. However, World Math Day practice and competition isn’t just for fun. Holley counts all of her students’ hard work during the class time as a participation grade, and once the results are calculated, World Math Day is a test grade for the students.

It’s obvious the sixth graders are more than happy to put their math skills to the test against others all across the world, because when Holley announces it’s time for P.E., 23 students ask if they can stay and continue working on math problems.