2014 through the eyes of Oneonta city manager Ed Lowe 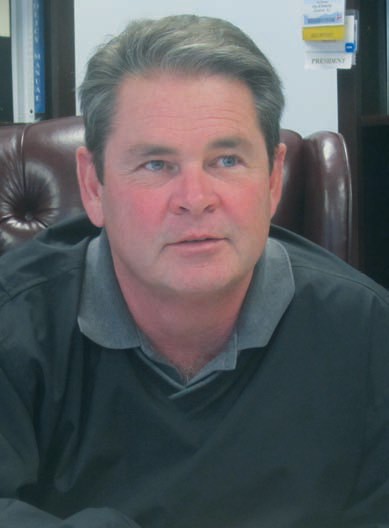 The Blount Countian sat down with Oneonta city manager Ed Lowe during the holiday doldrums and asked him to hit the high points of 2014 in the life of the city of Oneonta. Naturally, the referendum resulting in the authorization of alcohol sales by voters topped the list– the first half of the year with the buildup to the election itself, and the last part with the implementation and beginning of retail liquor sales for the first time in Blount County. Figuring readers have heard more than enough about the election, conversation focused on what has happened since then, and upon other significant developments, besides liquor sales.

“After the election,” Lowe said,“things became routine, uneventful really. I attribute that to the council’s advance preparations. The ordinance we passed facilitated the transition, and at the same time introduced a number of new activities to be handled – fire inspections and building code inspections for those applying for a license, the work of actually processing those applications and so on. It’s kind of a labor-intensive process.”

Lowe said there are currently 13 outlets selling alcoholic beverages in town. Many opinions were expressed during the election about how much tax revenue would be generated and speculation abounded. Now, Lowe said, the first two months’ results are in. For October 2013, (before alcohol) sales tax revenues were $310,763. For October 2014, comparable revenues (after alcohol) were $339,959, an increase of $29,196. For November 2013, tax receipts were $304,000. For November 2014, receipts were $353,000, an increase of $49,000. Not all retail outlets were online in October; most were in November. Those numbers do not include any beer excisetax money, Lowe said. That would add perhaps another $10,000 per month, he estimated.

“That’s an increase of 12.5 percent, taking the two months together of 2014 receipts over the same two months of 2013 receipts (not including any taxes on beer sales),” Lowe said. “It’s really too early to make reliable projections, but if those kind of numbers were to hold up for a whole year, that would work out to nearly half a million dollars annually. Of course, you can’t prove that all of those dollars are attributable to alcohol. It could be that pickled pigs feet sales took off and caused the increase, but that’s not likely.

“The change to selling liquor was the main thing that changed over the course of 2013 and 2014, and that’s where most of the increase likely comes from,” he said.

What about negative consequences of liquor sales? “Well, no increase in crime so far, and no problems so far with storeowners not adhering to regulations and requirements,” he said. “It’s been pretty smooth so far.”

“In 2014, local economic conditions began to improve somewhat,” Lowe said. “We were coming out of a pretty tough financial position over the last few years. We were not filling vacant employee jobs – not laying people off, just not filling jobs when people moved on. We didn’t buy equipment for awhile, even when we were scheduled to replace some things. Now, we can’t run that skinny forever, so we’re able to look at replacing employees, equipment and so on now. So the combination of the local economy improving somewhat and those conservative measures we had in place paid off in 2014. We don’t spend based on projected income. We don’t spend money unless its here to spend, and that’s what saved us.”

The $6.9 million 2015 city budget is a historic high, though it is only marginally higher than city budgets in the $6.5 million range for the last five years.

Significant benchmarks this year were a number of capital projects as the city moves forward into an economy that continues to recover slowly. Projects include replacing the lights at the softball field, replacing two police cars, buying a new excavator, replacing two older pieces of equipment – a ditching machine and a sidearm tractor/mower that are being phased out – and implementing a comprehensive salary administration plan based on quarterly treatment periods designed to stimulate employee retention. “You have to be competitive salary-wise to keep good employees. Otherwise, we go the expense of training them to be highvalue employees, and they take a job somewhere else where they’re paid more,” Lowe said.

“I can say that the city is just ecstatic about that gift from the Bess family,” Lowe said.“Nothing else that happened around here last year has been any better received than that. The potential for a civic pride feature is greater than with anything else that’s come along since I’ve worked here. For historic value, architectural value – there’s nothing else around here to match it – in the city, I mean. We’ve got covered bridges, of course, nearby and the city gets some benefit from those, but they’re not here in the city. Our vision for it, or how we think of it, is as a community development center. We already have interest from the historical society, from artist groups, even the Economic Development Council could use it to sponsor open houses. It will be the jewel of this community when we finish.”

“We wanted a solid, comprehensive partner to work with on economic development, and that’s a talented board they’ve got,” Lowe said. “The power of that organization actually lies with the mayors and the city councils of the municipalities and the county. As it jells, it’ll be a valuable partner.” Lowe said Oneonta contributed $17,276 in initial funding for the group, based on a formula that specifies $2 a head times the population of each municipality, along with the county population outside municipal limits. All county municipalities and the county government itself are participating.

Other items worthy of note

• local business development has not exploded as measured by new business startups Lowe said, adding “we’re still in the fringes of the economic downturn, but we’re starting to see the beginnings of renewed economic activity.”

• work continues to enhance Oneonta Airport; grants this year funded additional grading of the sides of runways and other work to improve safety and visibility of runways from the air; a feasibility study will be conducted to consider adding more hangar space to meet growing demand.

• Greystone Gardens, a new 12-lot subdivision, was approved this year; although construction of homes has not begun, this is the first new subdivision to be proposed within the city for several years, Lowe said.

• “There are always needs and wants that have not been addressed and that we want to address when we can do so,” Lowe said. Examples he gave:

1) continue to make progress toward a more walkable community; example: a sidewalk from downtown to Walmart, matching the “road to nowhere” sidewalk completed from downtown to Oneonta School; it’s been the butt of jokes, but it has been used a lot since it was completed, he said.

4) problem area: federal grants used to fund many municipal projects have significantly dried up in recent years; funds still occasionally become available, but municipalities must be poised to apply and qualify for them quickly in order to meet the “first come, first served” tendency that accompanies availability.