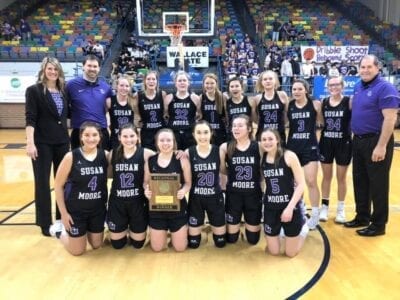 For the first time in school history, the Susan Moore Lady Bulldogs will play in the Final Four. The Lady Bulldogs beat Lauderdale County 63-54 early today to advance. They will face the Prattville Christian Academy Lady Panthers at 9 a.m. Monday, March 1, at Bill Harris Arena in Birmingham in the 3A semifinal game. With a win on Monday, […] 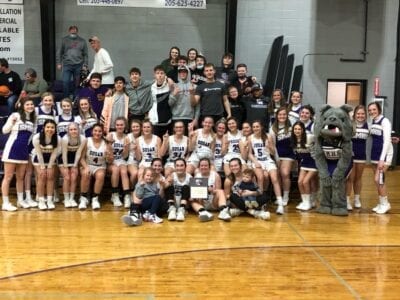 The Susan Moore Lady Bulldogs hit the court Wednesday afternoon in their Sub Region game against the Lady Bulldogs of Carbon Hill. After a two-day delay due to inclement weather, Susan Moore was ready and came out strong winning by a margin of 45 points, 66-21. The win earns them a spot in the Sweet 16 where they will face […] 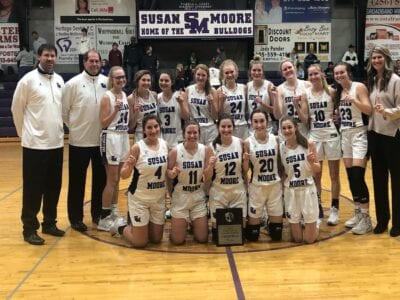 The Susan Moore Lady Bulldogs impressive season continues as they knocked off Holly Pond 65-48 to claim the Class 3A Area 13 Championship. It was also a special night for Madison Lipscomb who was recognized for her 1,000th rebound pulled down and Hallie Holmes for scoring 2,000 career points. The Lady Bulldogs will play Carbon Hill at home Monday, […]

As time was running out and Susan Moore down by 1, freshman Logan Blackwell’s  three-point shot found the bottom of the net and sends the Bulldogs to the area championship where they will face Brindlee Mountain. The final score was Susan Moore 59 – J.B. Pennington 57. Susan Moore travels to Brindlee Mountain Friday for a 6 p.m. tip off. […]

The Lady Eagles, Lady Hornets, Lady Bulldogs, Lady Redskins, and Lady Wildcats all go into next weeks area tournament as regular season area champs and home court advantage for the first two games of the postseason. Appalachian hosts No. 4-seed Victory Christian at 6 p.m. Mon. Feb. 8, in the opening round of the 1A Area 11 tournament. A win […]

On Thursday, Jan. 21, the Alabama Board of Pardons & Paroles denied parole for convicted murderer Micheal Anthony Mayola. Mayola was convicted for the 1962 kidnapping and murder of 11-year-old Larry Wayne Thomas. On Aug. 2, 1962, Mayola approached Thomas and a friend at a Midfield baseball field. He let the friend go before driving Thomas back to his Highland […] 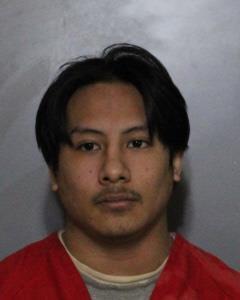 Blount County man sentenced for the murder of his parents

Leo Santiago Chavez received two consecutive life sentences plus 10 years for the capital murder of his mother and father and abuse of their corpses. He was convicted of three counts of capital murder for the deaths of Adalberta Chavez Ruis and Ricardo Santiago Gonzalez as well as two counts of abuse of a corpse and theft of property on […] 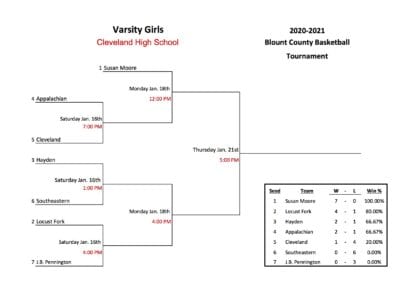 School officials finalized the brackets for the 2021 Blount County Basketball Tournament just after noon today. The tournament begins Saturday with the varsity boys playing at J.B. Pennington High School and varsity girls at Cleveland High School. The JV boys will play games at both schools. Each school will be allotted 100 tickets for each game they are participating. Those […] 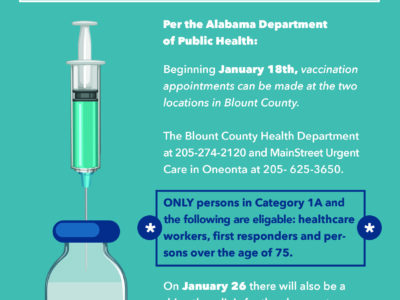 Phase One under way

The first round of COVID-19 vaccines arrived in Alabama nearly a month ago. Alabama was allotted only 240,000 doses, which will be administered in two phases. Phase One, which the state is currently in, calls for vaccines to be administered to frontline workers and those who reside in long-term health facilities. Each phase is broken down into subcategories administering the […]

Before the January Blount County Commission meeting concluded, Probate Judge and County Commission Chairman shocked those in attendance as well as those following via Facebook live with the announcement that he will retire from public service at the end of April. Green stepped into public service Jan. 8, 2001. Last Friday marked 20 years. He served 10 as the Blount […]