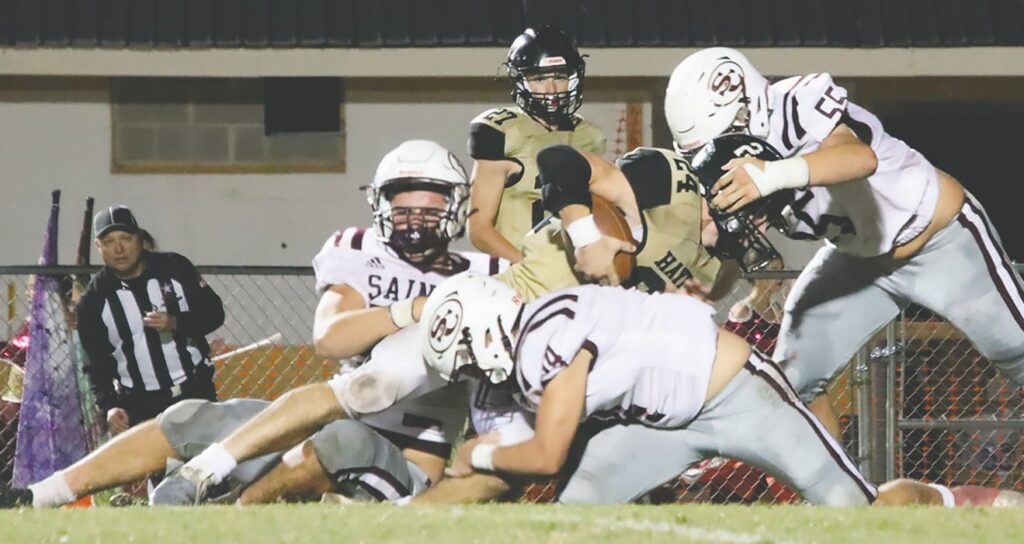 The Hayden Wildcats closed the 2021 season on a high note by defeating the St. Clair County Saints 26-20.

The Wildcats scored on a 3-yard run by Taylor McAdams. The point after failed, but Hayden had a 6-0 advantage. Less than three minutes later, Will Vines connected with Kyler Leamon for 24 yards and a score. Keegan Motte ran the two-point conversion in to give Hayden a 14-0 lead with 0:42 remaining in the first quarter. The Wildcats built a 20-0 cushion when McAdams scored from 21 yards out. The two-point conversion was no good.

Midway of the third quarter, St. Clair County scored their first touchdown on a 6-yard pass from Nigel Dowdell to Kevon Johnson. The try for two failed. Less than a minute later the Saints cut the deficit to 20-12 on a 13-yard run by Dowdell.

Early in the final period, SCC tied the game on a 20-yard pass from Dowdell to Jacoby Blanks. Dowdell hit Garrett Whitehead on the two-point conversion with 11:30 left in the game. With 6:44 left on the clock, Hayden took the lead for good on an 8-yard run by McAdams, his third of the night. 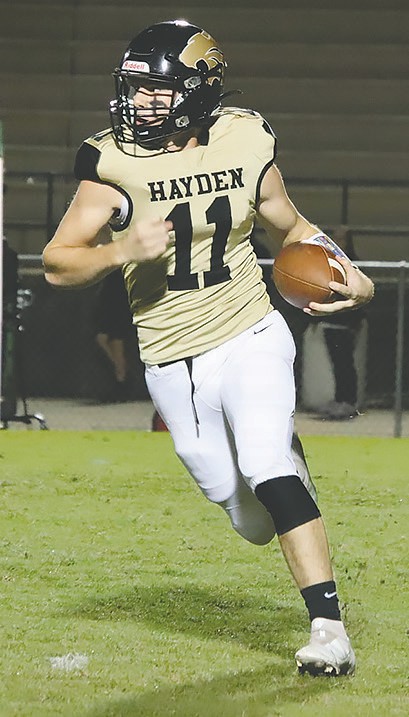 Will Vines rolls left on a keeper against St. Clair County. -Nancy Vines

McAdams led all rushers with 104 yards on 16 carries and three touchdowns. Ashton Hicks added 76 yards on eight attempts. Leamon had two catches for 20 yards and a score.

McAdams also led all defenders with nine tackles. Leamon and Terrance Bowie added eight each; Leamon also intercepted a pass late in the game to seal the win. Bowie had one sack and four TFL. Evan Phillips and Logan Weeks had seven tackles each. Nathan Wheeler had six tackles, one sack, and two TFL.

On offense, McAdams ran for 785 yards on 141 carries scoring six touchdowns. Hicks carried the ball 46 times gaining 302 yards and scoring four touchdowns. Smith had 260 yards on 62 carries with one TD. Vines finished the season with 43 completions on 112 attempts for 610 yards and three touchdowns. Brody Garner had 11 catches for 232 yards and one TD, Leamon had 12 receptions for 139 yards and one TD, and Wheeler had three for 74 yards.

Ed. note: Special thanks to Robert Bradford for his coverage of Hayden Wildcat athletics. Also, thank you to Jeffrey Williams for providing stats each week. I appreciate all you do not only during football season, but throughout the year.