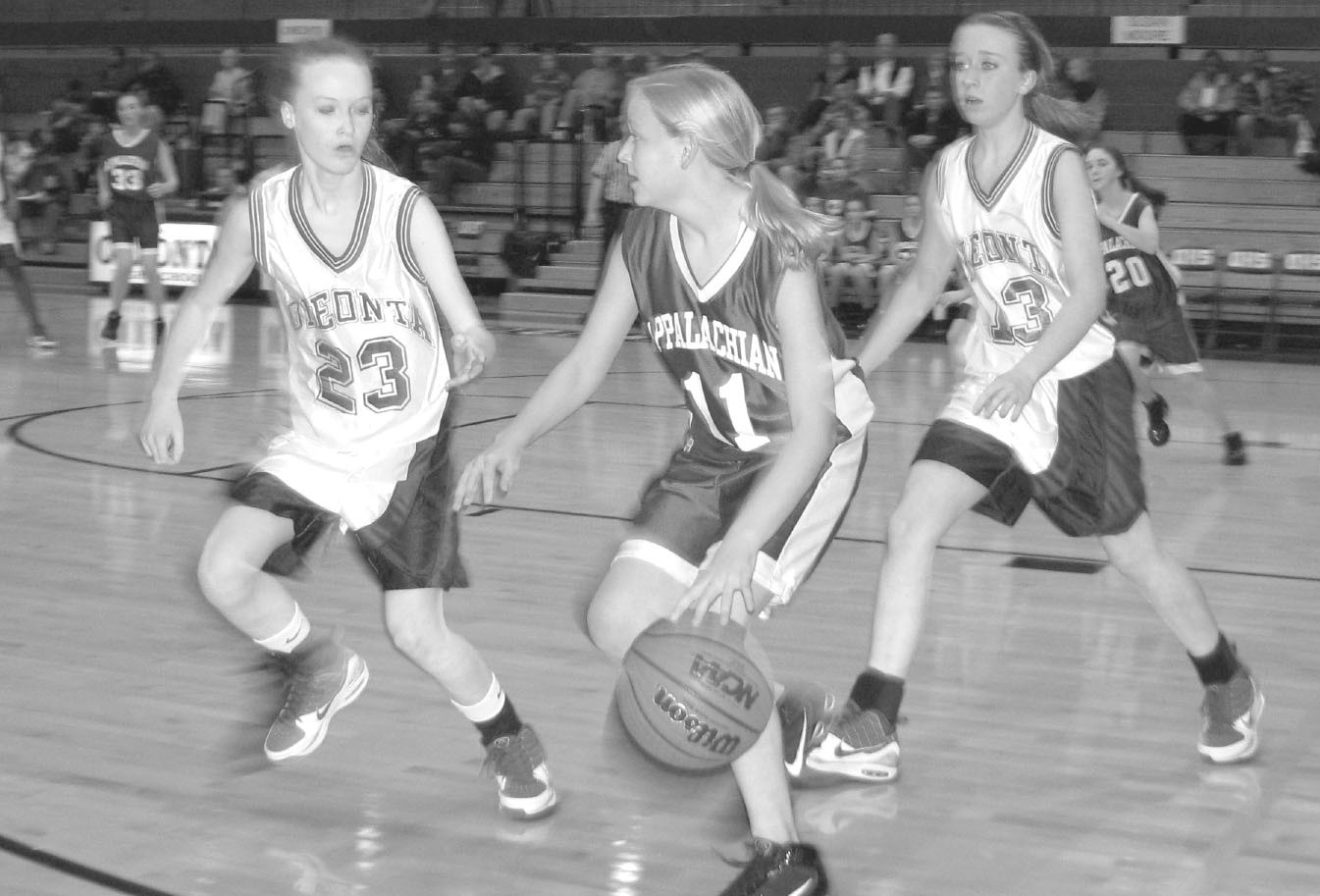 Appalachian’s Stephanie Metzler tries to get past the defense of Oneonta’s Anna Blackwood (23) and Emilee Roddam (13).

Last week’s cold snap and school closings due to travel
problems meant that Blount County’s high school
basketball teams were left with unexpected off days
right in the middle of the area schedule.
No games were played after Tuesday last week and
that means that several big area match-ups scheduled
for late last week will now be played either this week or
in two weeks (after the county basketball tournament).
Tuesday, Jan. 5
at Oneonta
Boys
Oneonta 63, St. Clair County 50

The Redskins survived a shaky first half to pick up
the big area win.
Oneonta, ranked No. 10 in Class 4A, led just 30-28 at
the half but things picked up considerably in the second
half thanks to a Redskin defense that forced 21
steals on the night.
St. Clair County (4-9, 0-4 in 4A Area 11) got 20 points
from Dee Franklin and 14 from Cody Helms.
Oneonta (13-4, 4-0) was led by Nolen Smith’s gamehigh
21 points. Ryne Wester added 17 while Keenan
Warren chipped in 15. Warren had six rebounds and
seven steals.
at Ashville
Boys
Locust Fork 50, Ashville 36
The Hornets led just 12-8 after the first quarter but
the visitors went on a 14-6 run in the second quarter to
take a 26-14 lead at the break.
The third quarter proved to be the difference. Locust
Fork jumped all over the Bulldogs coming out of the
locker room and used an 11-4 advantage in the third
quarter to build a commanding 37-18 lead after three
quarters.
Ashville got 12 points from Xavier Newton.
Locust Fork (10-5, 2-2) was led by Taylor Hughes with
20 points and Roman Owensby with 14. Kyle Smith
pulled down 12 rebounds.
at Pleasant Grove
Girls
Hayden 69, Pleasant Grove 41
The Lady jumped out to a 21-6 lead after one quarter
and were never really threatened in the game. The lead
grew to 30 points (59-29) to start the final quarter as the
visitors improved to 18-1 on the year and 4-1 in 5A Area
11.
Pleasant Grove was led by Ty Ware with 14 points and
Michelle Little with 10.
Hayden got a game-high 26 points from Mallory Ray
and 13 from Krista Stricklin.
Boys
Pleasant Grove 83, Hayden 12
The Spartans, ranked No. 3 in Class 5A, controlled
things from the opening tip, building leads of 22-4 and
47-8 at the end of the first two quarters.
Hayden got three points from Troy Fines and two
each from Cory Bartlett, Skyler Powell, Chris Duncan,
and Derek Brecht.

at Appalachian
Girls
Jefferson Christian 43, Appalachian 36
The Lady Eagles outscored the visitors 14-9 in the
final quarter but it wasn’t enough. Jefferson Christian
built a 34-22 lead through three quarters by outscoring
the hosts 13-8, 9-5, and 12-9 over the first three periods.
Appalachian (1-10, 1-4 in 1A Area 9) got a game-high
23 points from Abbie Phillips.
Jefferson Christian (9-5, 4-1) was led by Jennie
Monosky with 13 points and katie Coggins with 12.
Boys
Jefferson Christian 63, Appalachian 40
Appalachian jumped out to a 14-8 lead after one
quarter and carried a 24-23 lead to the half. However,
the visiting Eagles heated up over the final two periods,
outscoring the home Eagles 18-7 and 22-9 to win going
away.
Appalachian (3-8, 2-3) was led by Jeremy Hill’s 12
points.
Jefferson Christian (3-10, 2-3) put three players in
double figures as Jacorey Martin had 23, Lawrence
Thomas had 13, and Alex Coggins chipped in 11.
at Sardis
Girls
Susan Moore 46, Sardis 23
The Lady Bulldogs led 15-10 and 22-13 at the first two
quarter breaks and extended the lead during the second
half in rolling to the 3A Area 13 victory.
Sardis was led by Lauren Hall with eight points.
Susan Moore (13-7, 3-1) got 16 points from Kaitlyn
Williams to go with 11 points and six assists from
Hannah Holmes. Angel Hilburn added eight points.
Saturday, Jan. 9
at Corner
Girls
Hayden 77, Corner 31
The Lady Wildcats led 15-7 after one quarter before
blitzing the Lady Yellow Jackets 26-6 in the second
quarter to take a commanding 41-13 lead at the half.
Corner was led by Carissa Reeves’s 14 points.
Hayden (19-1) got 23 points from Mallory Ray, 22
from Krista Stricklin, and 10 from Sam Niblett.
Boys
Corner 61, Hayden 47
Take away the first eight minutes and this was anyone’s
game. Unfortunately, the visiting Wildcats trailed
19-3 after one quarter and never could find enough
offense to pull off the upset.
Hayden got nine points and nine rebounds from
Reese Butts and eight points each from Troy Fines and
Nathan Williams. Skyler Powell added seven.
Corner got a game-high 17 points from Jason Vaughn
to go with 10 from Tyler Jones.
Monday, Jan. 11
at Hayden
Girls
Erwin 42, Hayden 38
Seeking revenge for their only loss of the year, the
Lady Wildcats had early leads of 6-5 and 12-9. However,

the Lady Eagles came back to lead 18-16 at the half. The
third quarter proved to be the difference as the visitors
outscored the home team 15-8 to take a 33-24 lead to
the final quarter.
Hayden wasn’t done as the Lady Wildcats opened the
period on an 8-0 run to cut the lead to one. Erwin
answered with a run of its own and the lead stayed
between one and six points till the end.
Hayden (19-2, 3-2) got 12 points and eight rebounds
from Krista Stricklin and nine points and three steals
from Madison Durham. Tiffany Myrick scored just two
points but had 11 rebounds and five blocked shots.
Erwin (11-5, 4-1) got 14 points from Briana Shepherd
and nine from Jessica Calhoun.
Boys
Erwin 61, Hayden 19
The Eagles led just 8-2 after one quarter but
outscored the home team 18-7 in the second period to
take a 26-9 lead at the half.
Hayden got five points and three steals from Troy
Fines and four points each from Chris Duncan and
Derek Brecht.
Erwin (13-9) was led by Sherman Smith with 20
points and Perez Watts with 12.
This week’s schedule:
Wednesday, Jan. 13
Blount County Junior High Tournament First Round –
Oneonta
Thursday, Jan. 14
Blount County Junior High Tournament Semifinals –
Oneonta
*Oneonta at Ashville (BB, VG, VB) 5 p.m.
Friday, Jan. 15
*Vinemont at J.B. Pennington (BG, BB, VG, VB) 4 p.m.
*Holy Family at Appalachian (BB, VG, VB) 5 p.m.
*Locust Fork at St. Clair County (BG, BB, VG, VB) 5 p.m.
*Cleveland at Cold Springs (BG, BB, VG, VB) 4 p.m.
*Springville at Hayden (BG, BB, VG, VB) 4 p.m.
Oneonta at Cullman (BG, BB, VG, VB) 4 p.m. 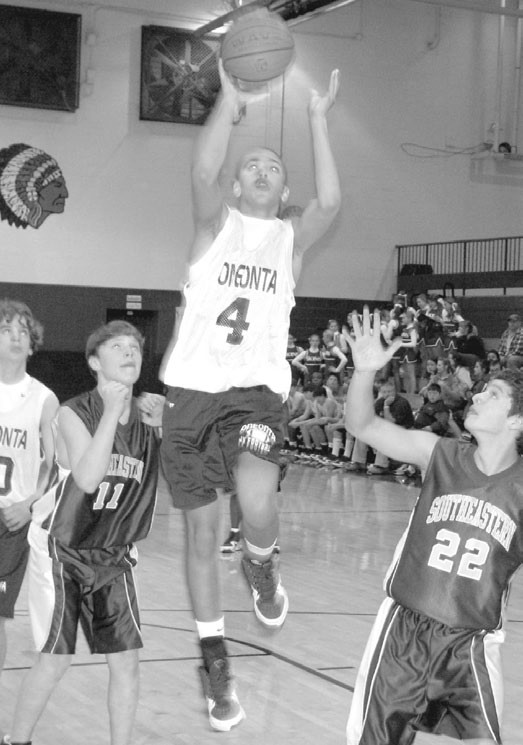 Oneonta’s Jalen Johnson soars in for a layup against Southeastern.