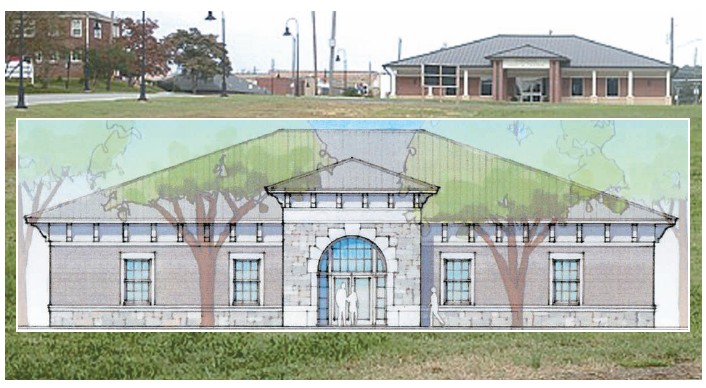 The Wallace State-Oneonta academic center will sit on this site in front of the current Senior Citizens Center (visible above the architect’s rendering.)

A groundbreaking ceremony for the Wallace State-Oneonta classroom and workforce development construction project, headlined by Gov. Kay Ivey, is scheduled for Oct. 19 at 2 p.m. , city officials announced last week. The ceremony will be at the site on the corner of First Avenue and First Street in downtown Oneonta.

“The new campus center will consist of 20,000 square feet of new facilities dedicated to the growing number of students and the expanding curriculum offered at Wallace State in Oneonta. The facility will also include multi-use classrooms for workforce development and other community economic opportunities,” according to a city of Oneonta news release. The floor plan for the academic center calls for six classrooms and two larger laboratories, along with supporting offices and facilities, city manager Ed Lowe said.

The ceremony is expected to last about an hour, with remarks from Gov. Ivey, Wallace State President Vicki Karolewics, Oneonta Mayor Ross Norris, Commission Chairman Chris Green, Economic Development executive director Don Mitchell, and Oneonta city manager Ed Lowe. The formal ceremony will be followed by the customary groundbreaking photo of dignitaries brandishing shovels, and miscellaneous photo ops involving the invitation list of some 300 guests and dignitaries. The public, expected to be the primary beneficiary of the project, is cordially invited, Lowe said.

The overall construction project will include a smaller, second building located on the present site of the Wren’s Nest, across the street from the academic center building. That building will be a 5,000-sq.-ft. multipurpose building dedicated to workforce development training, with space for Economic Development Council offices as well. Two meeting rooms will provide space for workforce development projects such as job fairs, special joint-venture technology training applications with other colleges and universities, and other workforce and community development activities.

When will the project be complete and ready for move-in by Wallace State? Lowe said the objective for construction completion is the spring of 2019. It will take a period of time after that for Wallace State to complete its move-in of furniture and fixtures, as well as installation of infrastructure such as computer, communications and office and classroom support facilities. The current Wallace state “temporary campus” will be retained as the Wallace State location dedicated to career and technical training.

When complete, the Wallace State academic center project will support, enhance, and expand the realization by the local community – recently given voice by Wallace State Oneonta Center director Kelley Jones that – “We’ve got a real college in town.”

Gov. Kay Ivey: “Expanding workforce development, especially in rural communities, is key to further growth in Alabama. I am very excited to see this initiative happening and am honored to join Wallace State, local elected officials, as well as the entire community for the Oneonta campus groundbreaking,” said Gov. Ivey. “Ensuring that all Alabamians are well-prepared for the workforce is not only important to attracting more companies to the state, but also goes to improve the quality of life.”

Oneonta Mayor Ross Norris: “This college is the real reason downtown development has taken off. It’s also the reason economic development within the county and the economic development work is picking up. This workforce development capability we’re beginning to have is helping with that. I’m so thankful for Gov. Ivey. She really made our day with her help. And Wallace State has been just wonderful to partner with. They helped us all along the way, and made sure we were going in the right direction. They know so much about how to do things, that kept us moving the way we should go. We committed to this project and all of our partners helped us get here. We were absolutely determined to make it happen, one way or another. I’m just so proud we’ve got Wallace State here. Oneonta will never have an opportunity like this again, and I can’t wait until phase two of this project (building the academic campus center) is completed and working so we can begin on stage three,” (expanding and enhancing the library, with its associated community and educational synergies.)

Wallace State president Vicki Hawsey Karolewics: “Wallace State Community College is honored to have been selected by the city of Oneonta and Blount County to partner with them in establishing a higher education and training center as a key strategy in becoming a Community of Excellence. Wallace State has far exceeded our initial enrollment projections to date, and with recent regional economic development announcements, we expect our growth to continue at a rapid pace. A recent Milken Institute report found that just one year of increase in postsecondary educational attainment will increase a community’s Gross Domestic Product by 17.4 percent and real wages per worker by 17.8 percent. Most importantly, however, as an economic development strategy, having a trained talent pipeline leads to securing more jobs in a growing community. We look forward to continuing to be a real partner in that strategy.”