Trojans no match for Eagles 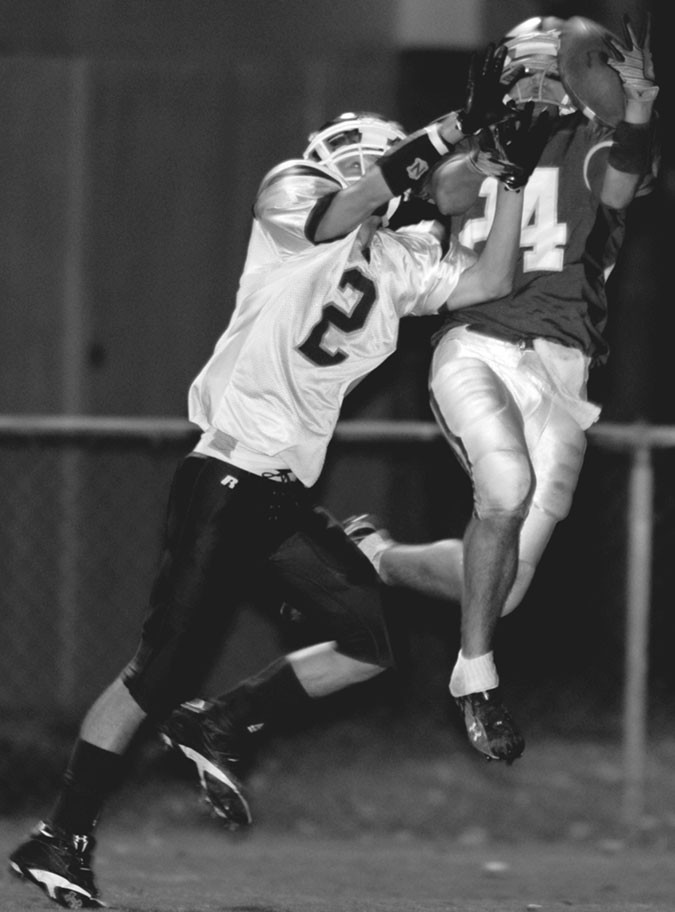 –courtesy southernexposurephotography.com Appalachian’s Jacob Chappelle pulls in a pass in front of a Gaylesville defensive back.

Appalachian limited visiting Gaylesville to just 119 yards of total offense in a 41-6 thrashing of the Trojans last Friday night in the first round of the 1A playoffs.


The Eagles got off to a fast start. A 32-yard touchdown pass from Jeremy Hill to Jacob Chappelle and a 1-yard run by Zac Blythe gave the hosts a 14-0 firstquarter lead.

Gaylesville got on the board late in the opening quarter by recovering a blocked Eagle punt but that was about the only thing the visitors had go in their favor.

Appalachian took a 21-6 lead to the half after Blythe scored his second touchdown from a yard out in the second quarter.


The Eagle defense continued to throttle the Trojan offense in the second half and the Appalachian offense tacked on three more scores.

Hill and Chappelle hooked up for the second time in the third quarter, this time on a scoring toss that covered 52 yards.

The Eagle ground game accounted for two more scores in the final period with senior fullback Tonny Strickland scoring runs of 5 and 10 yards.

Appalachian rolled over Gaylesville for 445 yards of total offense – 230 on the ground; 215 through the air.

Gaylesville never got anything against an Eagle defense that allowed just 77 yards rushing on 27 carries and 42 yards through the air (on 4 of 18 passing).

Dylan Schuman led the Eagles on the ground with 122 yards on 16 carries while Strickland added 69 yards and a pair of touchdown on 13 attempts and Blythe chipped in 62 yards and two scores on just seven carries.

Hill was an efficient 12 of 16 passing for 215 yards with two touchdowns and one interception. Chappelle caught four passes for 111 yards and two touchdowns. Schuman, Esgar Covarrubias, and Cameron Cox each caught two passes.

Dustin Brady led the Eagle defense with six tackles and a fumble recovery. Jake Cornelius had six tackles while Jeremy Peek had an interception.

Appalachian improved to 9-2 on the year while Gaylesville ended the year at 6-5.