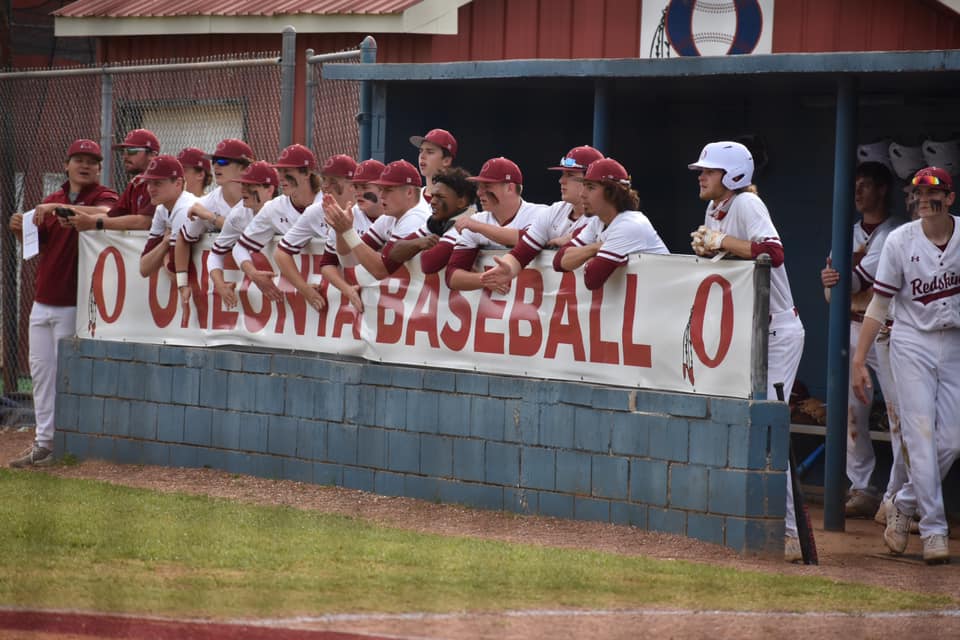 Friday’s second round games turned into a late night for the Redskins in Killen as they faced Brooks. Game one started at 4:30 p.m. and wrapped up a little after 8 p.m. with the Redskins winning 11-8 in extra innings. While not as long, a little more than two and a half hours had passed before Oneonta’s Andrew McElvey caught the final out in Oneonta’s 8-5 game two win.

Will Moye led off game one with a single on a line drive to center field, stole second, and advanced to third on Brody Moore’s ground out to first. Brodie Devaney drove Moye in for the Redskins’ first run of the game.

In the top of the second, Connor Faust led off with a walk. McElvey’s single on a hard grounder to third sent Faust to second. Then Sam Patrick sent Faust home on a ground-ball single to center field. After Moye was hit by a pitch, bases were loaded for Braden Moore, who singled on a hard grounder to right field driving in McElvey and Patrick to give the Redskins a 4-0 lead.

Brooks chipped away at Oneonta’s lead with one run in the bottom of the fifth to make it 7-3. They tied it up with four runs in their last at bat to send the game into extra innings. After a scoreless eighth, Moye singled on a line drive to right field with one out in the ninth. Moore walked and Devaney loaded the bases on a ground-ball single to left field. Hodge and Faust both walked bringing Moye and Moore home. McElvey then drove in two more on a line-drive single to left field scoring Devaney and Hodge to give the Redskins an 11-7 lead.

In the bottom half of the inning, Brooks managed to get one run back, but the Redskins held on to win 11-8.

Oneonta out hit Brooks 15-8 with Moye, Moore, and McElvey leading the way with three hits apiece. Devaney and Patrick each had a couple of hits while Beau Ragsdale and Faust each had one. Moore drove in four runs and scored two and McElvey drove in two and scored once. Moye, Devaney, Hodge, Faust, and Patrick all drove in one run with Moye scoring three runs, Patrick scoring two, and Devaney, Hodge, and Faust each scoring one.

In game two, the Redskins got off to a good start building an 8-0 lead through the first four innings. Moye led off with a single on a line drive to center field and scored on Ragsdale’s ground out. Moore scored the Redskins’ other first inning run after reaching base on a bunt single, stealing second, advancing to third on Ragsdale’s ground out, and crossing home plate safely on a passed ball.

Oneonta added two more runs in the bottom of the second. McElvey led off with a single and scored on a hard grounder from Patrick. Patrick wound up at third and scored on a passed ball with two outs.

Up 4-0, the Redskins scored three in the third. Devaney singled on a line drive to start things off and Ragdale followed him reaching on an error. Faust drove both in with a line-drive single to center field. Then, McElvey drove Faust in to extend the lead 7-0.

In the bottom of the fourth, Ragsdale knocked in Oneonta’s final run sending Devaney home. Devaney had reached base on a Brooks error. Brooks cut Oneonta’s 8-0 lead in half scoring four runs in the top of the fifth. They added one more run in the sixth to make it 8-5. The Redskins allowed just one runner to reach base in the top of the seventh as they held on to sweep the series.

Ragsdale and Faust both drove in two runs while McElvey drove in one. Devaney and McElvey led the team at the plate with two hits apiece. Moye, Moore, Faust, and Cameron Dailey had one hit each. Devaney posted two of Oneonta’s eight runs with the rest coming from Moye, Moore, Ragsdale, Faust, McElvey, and Patrick who each scored once.

The two wins give Oneonta a 20-7 record and a third round series at home against Curry with games one and two on Thursday and game three on Friday if needed. Game one starts at 4:30 p.m.