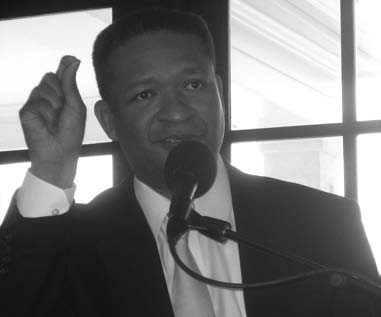 Warming up the morning audience last week, gubernatorial candidate Artur Davis joked he employs more Blount Countians on his staff – two – than any other candidate for governor. Besides, at his last Chamber breakfast in 2004, he got walking pneumonia from running through a driving rainstorm both before and after breakfast – yet he still agreed to this return engagement. “You owe me” on both counts, he laughed.

In an address last week to 135 at the monthly county-city Chamber of Commerce breakfast, U.S. Rep. Artur Davis (D- Birmingham) named quality of education in Alabama as the most important political issue facing the next governor. Davis is a gubernatorial candidate in the November election in a field of two Democrats and seven Republicans.

•education as “the most important thing” for the next governor of Alabama.

•the violence and vehemence in politics generally, which he deplored.

•unemployment and the resulting economic and personal trauma it produces.

•the disproportionate influence of a few powerful people who run the state and “have only their own interests at heart.”

“When it comes to education, in Alabama we pat ourselves on the back when we move up from 48th to 46th on some indicator of educational achievement. That’s not good enough,” Davis said.

Davis said that in addressing college students he often asks, “How many of you want to be in Alabama five years from today?” The ratio is three or four to one against remaining in the state after graduation, he said.

“Why? They don’t believe our state school systems will educate their kids adequately.

“Education: that’s the thing the next governor will spend most of his time on,” he continued. “The economy will get better whatever we do about it. We’ll balance the budget somehow. But whether we build schools that are ready for the challenges of the new era – that’s the real question we face.”

Davis summarized a number of problems affecting American life that he believes politics must address:

•debt is piling up.

•percent of children living in poverty is on the rise.

•standard of living is decreasing.

•children born after 1975 will be the first generation of Americans to earn less than their parents during their lifetimes.

•Al Qaeda is broken up into smaller parts but still dangerous.

•“sometimes friend” China is planning to beat us–not on the battlefield – but in the world economy.

The ‘clash of certainties’

Referring to the ubiquity and bitterness of political strife, Davis said political parties spend more time fighting each other and demonizing each other than working to solve problems, which are both serious and legion.

“We’re madder than we’ve ever been before with the left and right pitted against each other in a constant state of political conflict.” He said the idea is not to take passion or even partisanship out of politics, “but we could do without the anger and vehemence that prevail – the sense that if you don’t agree with me there’s something deeply flawed with you.

“We have to put aside the idea that our side is right all the time. We can find a way to solve problems and meet challenges because this country is a place with a special genius for reinventing itself. There’s no limit to what we can accomplish.”

As an example of the attitude needed, Davis cited the recently passed national healthcare legislation, which he voted against. Noting the extent of opposition against the bill in Congress and throughout the country, Davis said, “Something basic happened last week; in spite of the opposition, it passed anyway. The debate’s over. It’s time to move on now.”

Davis referred to a new factor on the Alabama scene: large numbers of the unemployed. “Everywhere I go throughout the state I see this new class of people: decent, hard-working, God-fearing people who’ve worked all their lives but are now unemployed – people who never even imagined they’d ever be unemployed and seeking help from the government.”

Davis said he’s visited businesses that were doing well a few years ago, expanding and hiring more people, that are now laying off employees and struggling to keep the doors open.

“That’s why I’m running for governor. I want to help all those who are hurt or wounded because they’re unemployed,” Davis said.

The table in a dark corner of the room

In a powerful image of political influence peddling, Davis pointed to one of the round serving tables in the Twin Oaks dining room, each seating several members of the audience. “Imagine a table like this with six or eight people seated around it in a darkened corner of a room somewhere in Montgomery,” Davis said.

“There’s no sunshine on this meeting, no recording of the discussions they have. Maybe you hear rumors about it, maybe you don’t. Maybe you read about it later in the newspaper, maybe you don’t. I’m tired of Alabama’s future being dictated by a few people deciding who can get a loan, who can run for office, who can get what favors from the Legislature. It wouldn’t be so bad if those people had the people’s interests at heart, but they don’t. They have only their own interests at heart.”

He voted against the recently passed national healthcare legislation which will provide health care insurance to 30 million people currently uninsured, Davis said, because it costs more than the country can afford; it contains good things that could have been provided much more simply and cheaply; it shouldn’t have required 3100 pages to make simple improvements; and it cuts Medicare funding by $500 billion, which will make it more difficult for the elderly to meet their health-care needs.

On whether he supports state funding for improvements to county roads: Davis said he supports Sen. Lowell Barron’s bill, which provides for renovating state roads and infrastructure including county roads, though he doesn’t believe the bill is perfect. He said if he becomes governor, he would change the emphasis of the program by removing the allocation of funds by transportation districts and allocate dollars based on “economic development priorities.” He said Blount County would benefit from such a strategy.

Davis said he is in favor of charter schools and addressed a number of “myths” he said opponents have used to attack the concept:

•if the state ban on charter schools were lifted, “we wouldn’t have to build a single charter school in order to receive federal education money,” he said.

•they make it possible for mid-career and other professionals who don’t have a teaching certificate to teach on a temporary basis.