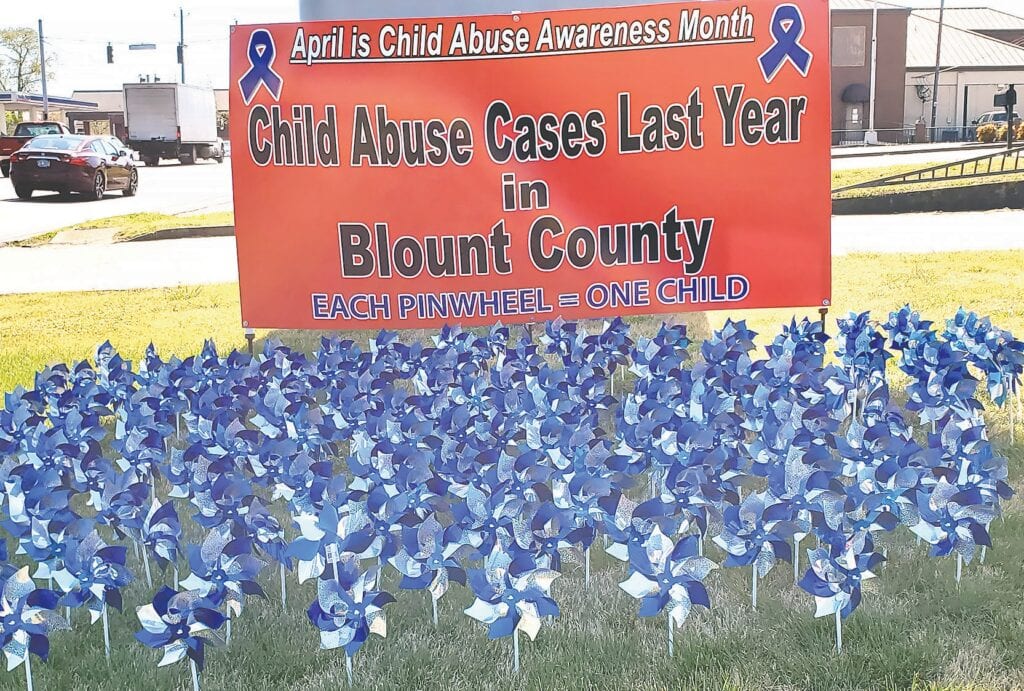 It’s April, and once again passersby will notice the 207 blue pinwheels spinning on the lawn of Cadence Bank (above). Though it is meant to bring awareness of the number of child abuse cases that the Blount County Children’s Center, in conjunction with DHR and the sheriff’s department, worked together to investigate, it is sad. It is heartbreaking. It is devastating.

It is sad, heartbreaking, and devastating, because each pinwheel represents a child that, for whatever reason, has been abused and/or neglected. Sometimes the abuse/ neglect is at the hands of someone they trusted, and other times it is inflicted by a stranger.

Either way, it is unjust, unfair, and totally uncalled for. Child abuse should not happen. Children should not have to endure pain and suffering such as this. They should be able to trust those who are supposed to protect them.

Yet each year, child abuse continues. I’m not talking about children being poor and not having a life of luxury. I’m talking about out-an-out abuse – blatant and intentional harm to minors.

If you’ve never been involved in witnessing or working with child abuse, I hope you never do. It is gut wrenching to hear and see a child whose life has been turned upside down because the people they trusted the most failed them.

And I’m not just talking about their parents or caregivers. Many times parents and caregivers do everything they can to keep their child safe; yet, there are predators in this world who thrive on hurting children. It is absolutely sickening to think about a child enduring physical, emotional, and sexual abuse. The wounds may heal, but the scars will forever remain etched into their soul.

As a previous social worker, I have seen first hand the trauma that abused and neglected children endure. It is sickening. I’ve even had to witness a cold, lifeless child lying on the morgue table because of someone’s failure to protect. That, my friend, is gut wrenching. It creates an anger within that cannot be described. It is something I hope no one ever has to do in his or her lifetime.

To see a lifeless child, once so vibrant and filled with joy and happiness, is heartbreaking. No longer will they have the opportunity to run, play, and give hugs and kisses like children are supposed to do. They have been robbed of life, and it’s because some people do not have their priorities in line or simply do not care.

Child abuse/neglect is running rampant. According to the state DHR website, more than 28,466 child abuse cases that involved 43,408 children were reported last year. Census data from 2019 shows those under 18 years of age account for 22 percent of the 4,903,185 documented Alabamians. Therefore, children account for roughly 1,078,185 of Alabamians. Of those, 4.3 percent are involved in reported child abuse cases. Let me say that again – 4.3 percent.

And while not all of the reported cases can be determined to be true, until we get to zero percent child abuse, that number will be too high. When a child abuse case is not determined as true, it does not mean it did not happen, it simply means that there was not enough supporting evidence to mark it as indicated.

Blount County DHR investigated a total of 568 cases of child abuse/ neglect in 2020 (which includes the 207 handled by BCCC). I often hear people blasting DHR because they did not get the outcome they wanted, but just like our criminal justice system, someone can’t be found guilty simply because a person said something happened. There has to be evidence whether it is physical, a witness statement, or other documented evidence. Remember, people lie, people minimize situations, and people refuse to talk. Many times victims are threatened, intimidated, or scared and choose not to disclose information. It also needs to be noted that many child abuse cases never get reported because of threats, intimidation, fear, or simply not wanting to get involved.

I hope and pray that I never get to the point where I do not want to report a possible child abuse case, because I know my failure to report could mean a social worker standing in front of the morgue table like I have done several times. It is something that no one should ever have to do.

I encourage everyone to do your part. If you believe a child is being abused or neglected, report it to DHR at 205-274-5200 or to your local law enforcement agency. You can even report possible child abuse cases anonymously.

Whether it is determined to be actual abuse or not is not your job. Leave that to the agencies designated to investigate. You may be the difference between a lifetime of pain and suffering and a life of safety and protection. Hopefully we will see a day when there are no pinwheels located on the lawn.