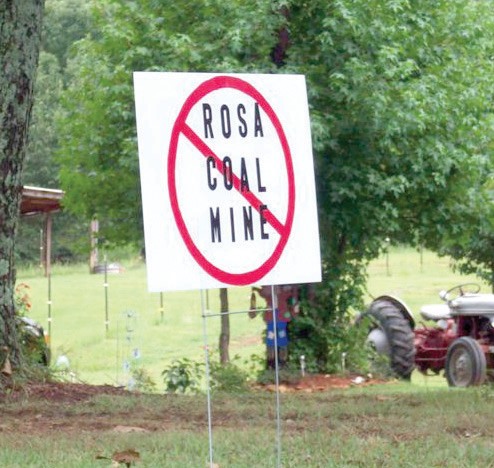 Self-styled Friends of Blount County is preparing to oppose reactivation of the Rosa Mine with signs, flyers, and blogs (friendsof blountcounty.blogspot.com). This sign appears in the yard of Darrell Clifton of Mountain Gap Road, who lives within about 100 yards of the mine’s proposed prep plant and coal washer site. Clifton said he and others of the group distributed at a traffic stop in Cleveland over the weekend some 500 flyers opposing the mine.

The Alabama Surface Mining Commission issued a notice last week that an informal conference to receive comments on permit application P-3931 by MCoal Company to mine coal in the area of the old Rosa Mine has been set for Tuesday, Sept. 15 at 6:30 p.m. in the auditorium of the Frank Green Building in Oneonta.


The meeting had been originally scheduled for Aug. 19, then cancelled to allow time for correction of irregularities in the legal description contained in MCoal’s application, according to mining commission director Randy Johnson.

The notice says the mining commission “reserves the right to limit the length of each presentation in order to allow all parties an opportunity to speak.” Any person needing special accommodations should contact mining assessment Robert Allen at (205) 221-4130 at least two working days before the meeting, according to the notice.