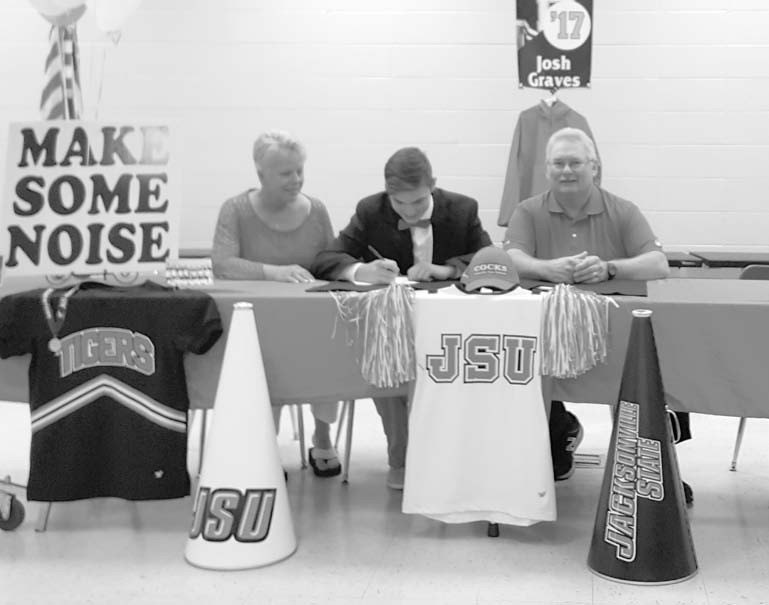 “If anybody can fire up a crowd, its Josh,” said Melanie Ganus, who has been Graves’s cheerleading coach for the last two years.

Graves is no stranger to hard work. Graduating with a 4.45 GPA from Pennington at the end of May, he will receive an advanced diploma with highest honors. He has received numerous honor society and academic awards while in high school, as well as being named as an All American Cheerleader through the Universal Cheerleaders Association in Memphis, Tenn.

Besides being voted “Most School Spirit” by his senior class, his many other accomplishments include being a member of several school and community organizations, a three-year member of the Pennington Band drum line, and a varsity cheerleader for two years – all while working at Jack’s Family Restaurant in Blountsville for the last three years.

Planning to major in computer science with concentration in cyber security while at JSU, Graves already has earned 42 college credits as a dual-enrollment student at Wallace State Community College.

Graves is excited as he begins another chapter in his life. He said, “I want to thank my parents for their support and preparing me to move away to pursue a degree and to cheer for the Gamecocks for the next four years.”

Graves is the son of Bobby and Debbie Graves.