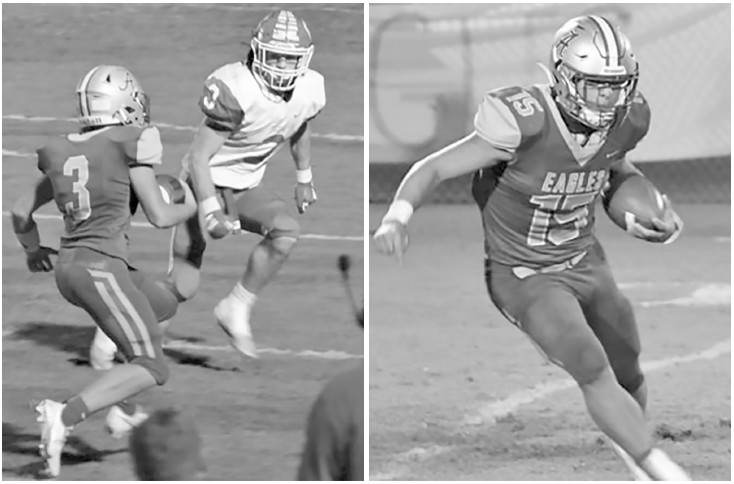 On Friday night, the Appalachian Eagles played under the lights of James E. Carr Stadium for the first time this month. They hosted the Cedar Bluff Tigers in a region matchup. The Eagles, however, came up short falling to the Tigers 28-48. Offensively, they ran the ball well gaining 202 yards, but they only threw for 71. The Eagle defense had a hard time containing the run as Cedar Bluff finished the game with 295 yards. They added another 98 through the air.

Cedar Bluff got on the scoreboard first on Jacob Burleson’s 1-yard run. They added the point after for the 7-0 lead. Appalachian answered that score with one of their own. Chase Payne’s 5-yard toss to Paco Jiles put them on the board. Damian Zavala’s extra point evened the score.

It was all Cedar Bluff in the second quarter as they scored 21 unanswered points giving them a 28-7 lead at the half.

The Eagles scored first in the third quarter. This time Payne hit Taylor Barger for 5 yards and a TD. Zavala’s second kick on the night was good cutting into the lead 14-28. The running attack kept the Eagles’ defense on their toes all night as Cedar Bluff scored three more unanswered touchdowns for a 48-14 advantage deep into the fourth quarter. The Eagles tacked on another 14 points before the final buzzer, though. Brian Downs scored on a 5-yard run and Payne threw a 26-yard pass for the final points of the night.

Payne completed 10-of-24 for 71 yards, three touchdowns, and one interception. He ran for another 96 yards giving him a total of 167 yards for the game. Downs gained 75 yards and scored once on three carries. One of those carries was good for 66 yards. Barger finished with one touchdown and 23 yards on three catches.

Downs led the defense with nine tackles while Joey Williams finished the game with seven. Payne and Bryson Seawright recorded five tackles each.

The loss drops the Eagles to 1-6 overall and 1-4 in Class 1A, Region 7. Friday, they travel to Woodville to take on the Panthers.