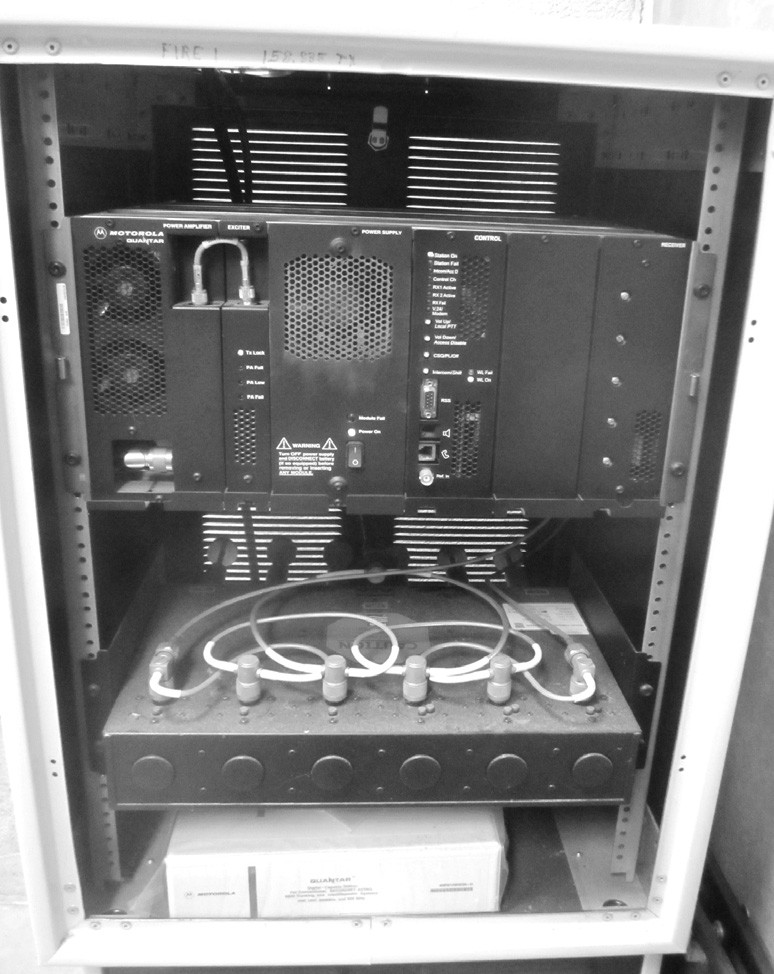 This is the cabinet part of a repeater, often referenced in discussion of 911 two-way radio communications. The other part of the repeater is the antenna mounted above the repeater on a tower. Each repeater, located at a remote location, receives a signal from the 911 base station, then ‘repeats’ it. The county 911 network now consists of the base station at the 911 Center in Oneonta and three repeaters, located at Palisades Park, Smoke Rise, and Pine Mountain.

At its regular 911 board meeting Thursday, 911 director Caleb Branch gave a presentation summarizing options to stimulate board consideration of what steps to take to improve the countywide radio communications system for fire and law enforcement responders.

• Continue routine operation and maintenance of the system, implementing improvements that can be made without substantial cost, such as diagnosing and repairing faulty mobile units and developing training on system protocols (“human factors”) for both dispatchers and field users.

• Adding more repeaters to provide improved coverage in areas where signals don’t penetrate sufficiently to allow reliable two-way communication; it was noted in discussion that additional repeaters may improve coverage, but may also introduce another layer of complexity for users on both ends of the system, thus degrading performance somewhat.

• Hire a consultant to diagnose coverage and signal strength of entire system and prepare recommendations for optimum improvement, or alternately, engage consultant to assist in preparation of a 10-year technical strategic plan to allow for accommodation of new technology.

• Increase staffing at the dispatch center to respond to peak calling periods, including routine peaks experienced at predictable times, such as Friday afternoons.

The board also discussed member Bob Sanford’s idea to place a camera similar to the one at the 911 Center atop a tower located near the intersection of Ala 160 and I-65; camera would enable dispatchers to view an intersection that is the scene of frequent accidents, as well as view a portion of I-65 for a distance both north and south of the intersection; without making a decision to do so, the board decided to continue to explore costs and further aspects of the idea.

In other business, the board:

• voted to continue the program of checking repeater performance using a two-way radio communications vendor, and to pursue any adjustments needed on repeaters; only one minor need on the Fire 2 backup channel has been identified so far.

• voted to issue two credit cards on a new charge account for the use of the 911 director and authorized employees, as a convenience to employees and as an aid to financial tracking for accounting purposes.

• voted to accept the director’s recommendation to predicate future pay treatment of 911 employees on performance evaluations.

• noted that 12 applications have been received from candidates for the position of GIS mapper, to be jointly funded by the 911 Board and the county.

• discussed demolition of the old 911 Center which has already begun on the interior; the board will receive an architect’s rendering of the site as it will look when converted to a landscaped parking lot.