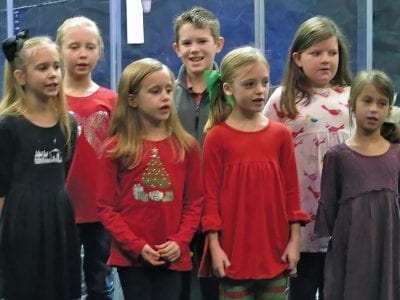 Members of the Lester Memorial United Methodist Church Children’s Choir ensemble added a special touch to the seasonal feeling when they sung at the Christmas breakfast program, sponsored by the Blount County-Oneonta Chamber of Commerce and hosted by Lester Memorial Church. From the left are ensemble members Atte Harvey, Kearstin Wilson, Mallory Morgan, Ian Evans, Reagan Phelps, Lucy Ashby, and […] 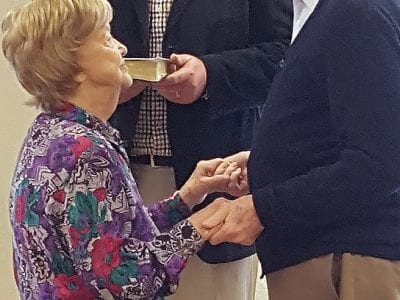 On Dec. 20, Ed and Dorothy Congdon celebrated their 73rd wedding anniversary with a host of family and friends at The Gym. Recently, Ed was talking with a friend about he and Dorothy’s marriage and said, “After 73 years, no one has ever been able to untie the knot. It’s a magic knot.” This is such a fitting statement from […]

The town of Cleveland held a special council meeting on Dec. 5 to discuss, according to the minutes, three matters, two related to the park and its readiness for the upcoming “Christmas in the Park” celebration. The first concerned the need for a new sound system, according to Councilman Doug Hill. Hill presented the council with an estimate of $4,150 […] 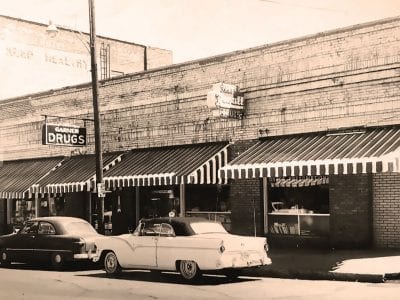 First of series begins at First and First

[This marks the beginning of what is planned as a several-part series on Oneonta businesses in 1955. The reporter obtained a 1955 local telephone directory listing business addresses which provided the main factual basis for the project. Additionally, that year marks almost the halfway point between the founding of the city (64 years prior in 1891) and the 2017 series […]

CITY OF ONEONTA The regular council meeting has been changed and will be tomorrow, Dec. 28, at 5:30 p.m. ONEONTA PUBLIC LIBRARY will be closed Jan. 1. No items will be due and no late fees will accumulate. Dropbox items will be checked in as being turned in the day normal hours resume. Hours are Monday and Thursday, 9 a.m. […]

Stephen Michael Crawford, 21, wanted for capital murder in Jefferson County, was apprehended last Tuesday at a mobile home on Old Walker Road in the Nectar area. The law enforcement team making the arrest was headed by U.S. Marshals, assisted by the Warrior Police Department and the Blount County Sheriff’s Department, according to Blount County Sheriff’s Department Operations Officer Tim […]

The office of The Blount Countian will be closed on Monday, Jan. 1, for New Year’s.

The Blount County Commission handled a full slate of business at last week’s meeting. There was discussion about the budget for the Blount County Sheriff’s Department budget and other matters. The Blount Countian has invited Commissioner Dean Calvert and Sheriff Loyd Arrington to sit down together with us and both have accepted the invitation. We are working on scheduling that […]

It was el dia (the day) before Christmasand all through the casa (house),telenovelas (soap operas) were playing,and we were making masa (dough).Los ninos (The kids) in their camas (beds),waiting for Santa in their red pyjamas(pajamas).While hanging las calcetas (the stockings)and decorating el arbol (the tree),my abuela (grandma) saw us and said, “tencuidado” (be careful)!We sat and esperamos (waited) for SaintNick,as […]

County gets grant for 2011 storm damage Gov. Robert Bentley last week notified the Blount County Commission last week that a $758,572 Community Development Block Grant for the county had been approved. The grant proceeds will be used to repair Maple Drive in Blountsville and a portion of Joy Road from Blountsville to the Skyball Road intersection. Both roads were […]