The Addison Bulldogs rolled up 279 rushing yards in an 18-0 victory at Appalachian last Friday night. Addison improved to 3-2 overall, 3-1 in 1A Region 6, while Appalachian dropped to 0-4 overall, 0-4 in the region. Playing without starting quarterback James McMunn, who is out for the remainder of the year with a knee injury, the Eagles managed just […] 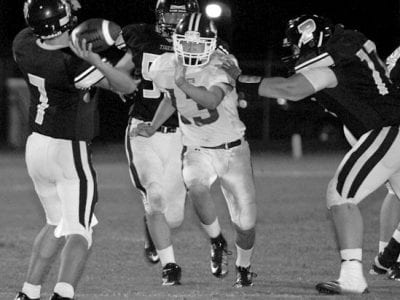 Hornets too strong for Tigers


The Locust Fork Hornets outscored the J.B. Pennington Tigers 21-2 down the stretch to pull away for a 48-24 win in Blountsville last Friday night. Each team’s record now stand at 1-4 on the season. Locust Fork got a big night from senior quarterback Geoffrey Bramblett, who completed 13 of 24 passes for 206 yards with four touchdowns and an […]

The Blount County-Oneonta Chamber of Commerce and The Blount Countian will cosponsor a political forum at 7 o’clock tomorrow night – Thursday, Oct. 4 – at Eris Horton Auditorium at Oneonta High School. All six candidates running for the office vacated by former State Rep. Elwyn Thomas have been invited to participate. Admission is free and the public is invited […]