The theory of dual federalism holds that the federal and state governments are co-equals, each sovereign in its own right. Under this theory, sections of the Constitution are interpreted narrowly, such as the Tenth Amendment, the Supremacy Clause, the Necessary and Proper Clause, and the Commerce Clause. Under this narrow interpretation, the federal government has jurisdiction only if the Constitution […]


Physician concerned Dr. Ira B. Patton, president of Blount County Medical Association, met with editors of The Southern Democrat recently at the newspaper’s invitation to discuss his feelings centering around Blount Memorial Hospital and the possible sale of that hospital to Carraway Methodist Medical Center. At that meeting, Dr. Patton asked that this newspaper refrain from publishing further comments or […]

Over the past several weeks I have been noticing how people are viewing themselves. I have heard numerous times “I want to lose weight” or “I am exercising but I am not getting skinny” or “I NEED to lose weight.” My favorite, and the reason for this article, is “I can’t come to the Gym until I lose some weight.” […] 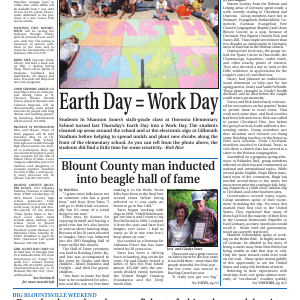