BLOUNT COUNTY VOAD will meet Tuesday, March 30, between 11:30 a.m. and 12:30 p.m. at the Blount County EMA office in the courthouse. BLOUNTSVILLE HISTORICAL SOCIETY will meet Monday, March 8, at 7 p.m. at the historical park on U.S. 231 North. The public is invited to the meeting to hear Janice Graves’s presentation about the merchant marines. Details will […]

Members of Snead Town Council tabled approval of bids for razing the condemned house at 446 Blackmon Drive. Thomas Utility Construction offered the lower bid at $12,000; Nix Construction submitted a $13,800 quote. Jack Freeman, a leader in the effort to condemn the property, made the motion to table. He has frequently said the town would be fortunate to get […]

You may be an eligible worker


The whole nation is gearing up for Census 2010, an undertaking as vast as it is important since population results will help determine how federal funds are spent nationwide and in local communities. Here in Blount County, 60 workers are needed to work some 20 to 40 hours per week contacting residents and taking information for the census. Workers will […]

Remlap firefighters will soon be more effective in putting out brush fires, suburban land fires, and other ground fires in rough and inaccessible terrain. The squad will use the $26,600 grant just approved to buy two skid units, each containing a tank, pumper, and hose mounted on a self-contained platform that easily slides into two of the department’s four-wheel-drive vehicles. […] 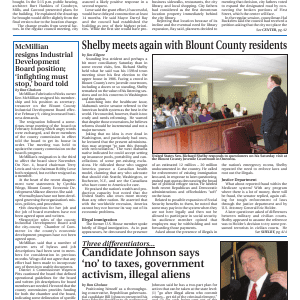